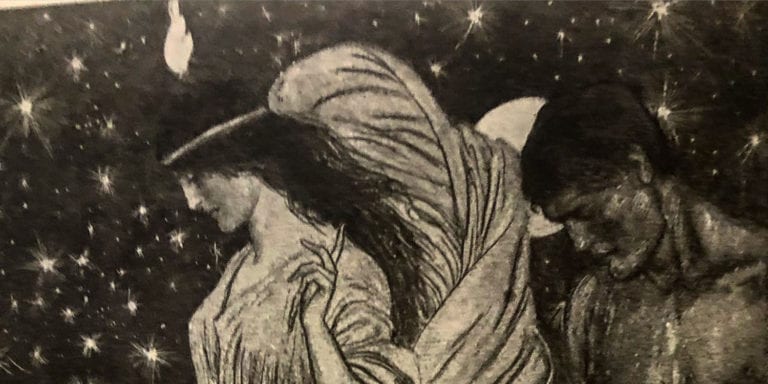 Round and Round 22 ended with the bookseller being drawn to visit Althea’s bucolic cottage and grounds after her sudden disappearance with Barbara and the Snallygaster.

When he arrived, the property was completely altered. It appeared to be a sad abandoned old white clapboard cottage.

Gone were the lush woodland gardens. The perch was now bare of planters and crafts. Only a sad decrepit rocking chair occupied it. The magic had left the place.

A package mysteriously appeared on the front porch, and since the property appeared derelict, he took it away with him when he left for home.

When the bookseller got home, the place was dark. He hated coming home to a cold dark house.

When he turned into the drive, the headlights illuminated the small peaked front porch. A large Horned Owl with brilliant golden eyes blinked down at him from the roof.

He got out of the book van and then recalled the package. He bent in and retrieved it.

As he took the stone path through the small front yard, he looked up and saw the shadow of the owl take flight and sail away silently above him.

‘Someone is watching over me,’ he thought to himself.

Up the seven front steps. He unlocked the front door and entered. He dropped his keys on the floor near the door. It was a habit so he wouldn’t misplace them somewhere in the house. He often left things in places that made sense at the time but were impossible to locate the next morning.

He headed right for the kitchen and switched on the light. He set the package on the counter. Two paces to the liquor cabinet. He withdrew a bottle of 20-year-old Springbank Single Malt—Cask Strength. He poured couple fingers into a Waterford crystal tumbler. He took a sip, and the warm smooth fire flowed down his throat through his chest and into his stomach.

He gave his head a little shake and took a deep breath.

It had been a long day.

Despite all the excitement, he felt sadness pour over him.

A second, longer pull at the glass changed that for a moment.

He had lost his bookshop apprentice, whom he had grown quite fond.

“But I gained a cat!” he exclaimed aloud.

He began laughing and then coughing and choking convulsively.

When he had settled down and caught his breath, he thought:

“I’ve got all the books anyone could ever want, but I don’t have anything.”

He noticed the package and moved down the green marble counter to it.

He set his tumbler next to it and leaned over to inspect it.

It was about 8 by 10 inches. Maybe 3 inches thick. It was wrapped in old very thick craft paper. Bits of pulpwood were embedded in the rustic paper. The whole thing was tied with frazzled jute twine finished in a square knot. The package had no addressee or return address. Looking more closely, he could make out two letters written in old style calligraphy in a brown ink that nearly matched the paper. In the upper left corner was the letter “A.” Where the addressee would typically be there was a “Q.”

There was no postage or any other identifying marks or labels on the package anywhere.

His funk was fading as the tumbler emptied. The package intrigued him. It had a very 19th century feel to it. He pulled open a drawer and withdrew a steak knife. He inserted the blade under the twine and sawed away at it til it came apart with a little pop. The paper was not held together with any adhesive, but it was folded over numerous times.

‘A bit of overkill on the wrapping,’ he thought.

He knew there was something in the middle because of the weight.

Finally, he got to the heart of the matter.

“All I ever get is books.” He chuckled.

He turned the old embossed cloth volume over.

He gently stroked the gilded cover with his hand.

“Nobody reads Haggard any more—but, boy, I used to able sell this book in a day… I guess enthralling lost race fantasies about eternally beautiful women are not what they once were.”

“It’s probably a 50 dollar book now…if that. Damned internet. If anyone had ever told me I’d be selling books on a computer…for pennies… Damn!”

He slapped the cold marble counter firmly with his palm, lifted the crystal glass and sipped down the last of the Springbank.

“Ahhhhh….shaa…” he intoned in an almost summoning tone.

He poured two more fingers of the whisky and set it down to breathe. Stepping over to the sink, he lifted the handle on the sink and filled a glass with water.

He stepped back to the book and took a sip of scotch. The warmth was now rising to his temples. He lifted the front cover and peered at the copyright without letting the book open more than 45 degrees.

“It’s a first, unless I’m forgetting a point or something.”

The page fell, and now he was seeing the title page.

In oxblood colored ink, there was a nearly Gothic:

written beneath the title.

He drained the glass of water, picked up the whisky in one hand and the book in the other. Leaving the kitchen, he turned off the light switch with his elbow.

The stairway was barely illumined by the moonlight filtering in through the leaded glass fanlight above the front door.

He trudged up the steps, his feet heavy with the day’s exertions.

In the bedroom, he set the glass on the bedside table and turned on the lamp. He fell back heavily onto the bed. He used the toe of one shoe to pry off the first shoe and the stockinged toe to get the other off—kicking both to the floor.

He let his head fall back onto the pillow. Reaching blindly for his reading glasses and slipping them on, he began reading the old novel.

He was soon in the Middle East.

Soon after, he was somewhere else entirely. Somewhere “past the streams of Oceanus, close to Asphodel Meadows, where the spirits of the dead reside.” 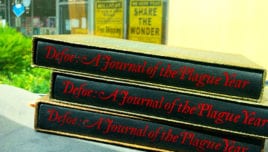 The week has been yet another blur. There are new and traditional problems everywhere... END_OF_DOCUMENT_TOKEN_TO_BE_REPLACED