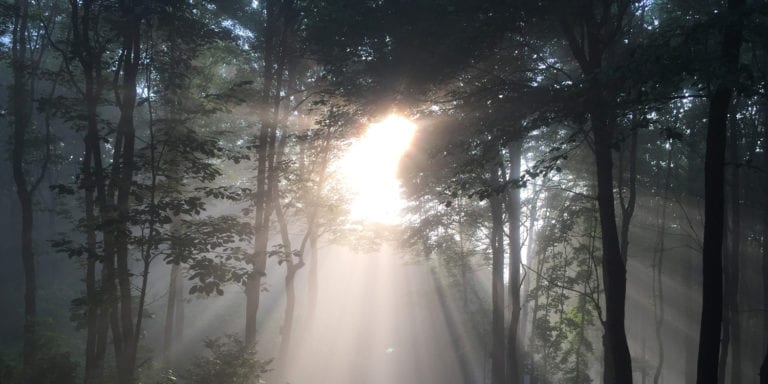 Round and Round 19 ended with the bookseller spending the night in his van in the bookshop’s parking lot. Wild sounds emanating from the back room of the store had forced him and Althea to close. They blocked the entrance to the parking lot with the van. They did not want any curiosity seekers approaching the building. The next morning, Althea and Barbara woke him by tapping on the van’s window.

The bookseller awoke with a start. From the bed of the van, he leaned over the driver’s seat and looked out the window. The two women stood there peering at him. Behind them, the bookshop and the woods beyond were bathed in an eerie fog. The dawn’s rays were struggling to penetrate it.

Barbara looked every bit a woman archaeologist from the 1920s. Her pith helmet and her cheeks were covered in dust. She wore jodhpurs and a linen blouse.

“I came as soon as I could. It was quite a flight against the wind!” she said breathlessly. “You found old hex signs behind those walls?”

Ignoring him, Althea replied: “Yes. Five of them. One on each wall and one on the ceiling.”

“And there were brooms suspended in each joint where the ceiling meets the wall?”

“Well, what are we waiting for? Let’s go see these archaeological discoveries!” Barbara exclaimed, and she began striding determinedly across the parking lot. Her leather boots, which laced to her knees, made a “cloocking” sound with each step she took.

Althea started following her at a bit of a jog to catch up.

The bookseller scrambled out the sliding side door of the van, pulling his shoes on and stumbling after the two women.

All three slowed as they approached the porch steps. There was a rising and lowering “hummmmmmm” emanating from the building. If anything, it resembled an enormous “snore.”

The bookseller unlocked the door and pulled it open. The silver bell above them gave a frightened shivering trill.

They stepped across the threshold. The store was noticeably cold.

Barbara led the way toward the back at a marching pace.

When they got to the door to the back room, the two women inclined their heads toward the knob, indicating they expected the bookseller to open the door.

“I didn’t think women wanted doors opened for them anymore,” the bookseller chuckled.

“You’re the most expendable,” Barbara replied.

He gingerly stuck his right forefinger toward the metal knob. When he touched it, his hand sprang back as if shocked!

“Are you all right?” Althea queried.

He pulled his sleeve over his hand, grasped and turned the doorknob. As he pulled it open, a puff of cold steam flowed out of the room.

They stepped to the center of the room. The cold fog engulfed them.

On each of the four walls, a large wooden disk was attached to the ancient whitewashed stone.

The trio turned round and round very slowly.

Then Barbara tilted her head back to look at the ceiling. The other two followed suit.

“These are old. Very old,” Barbara whispered, breaking the silence.

“You didn’t ask Tim to rip up the floor. I’m guessing there’s another underneath these boards,” Barbara stated matter-of-factly, digging at a wooden plank with the point of a boot.

“Why seven points, Barbara? Seven days of the week?” the bookseller asked.

“The Seven Seals on the Book in Revelation?” the bookseller posited.

“Books…it is always a book with you…”

“The seven points—it’s to ward off evil, isn’t it? The heptagram,” Althea whispered.

“Well, someone put these up in here. It must mean something,” the bookseller said a little too loudly, drawing severe looks from the two women.

“You are correct,” Althea said.

“Someone put these here long ago. And, yes, they mean something.”

“Maybe we are overthinking it,” Barbara stated.

“What are your thoughts?” Althea asked.

“Well, let’s go back to when we first walked in here.”

“We all turned round and round.”

“There’s one above us and we assume there is one below us. And they are all…”

“These aren’t put here to ward anything off,” Barbara announced.

“They are here to keep something in,” Althea whispered awestruck.

“You mentioned the ‘Seven directions.’ This room has six sides. North, east, west, south, above and below.”

“The seventh direction is within.”

“Who is it?” the bookseller asked. “Some ghost. A lost soul? Trapped here by…”

Barbara nodded silently and then added: “Not a ghost exactly. A ‘Chimera’ or at least that was the best Latin word the writer of the PowWow book could match to it.”

“All these years, and something has been living in the back of the bookstore.”

“Not living so much. And not really ‘here’…at least not very often…just…within.”

“If we removed one of the hex signs, we could free it!” the bookseller said as he stepped to the wall before him and set his fingers behind the edge of the wooden disc.

“NO!!” Barbara stepped and put a hand upon his shoulder. “No.”

“I don’t want it haunting this place anymore. What if the customers heard those screams?”

“You do not want it loose either. At least not yet. We need to think this through. I need to reach out to an old friend. A friend who is even older than I.” Barbara chuckled. “I am certain she will agree with my assessment.”

“THE—as in the only one? But the sightings over the years…”

A drop of water fell from the ceiling above. It landed just below Althea’s left eye and rolled down her cheek.

“We must get it out of here as soon as possible. Our activities have stirred the wretched thing up tragically. The creature has suffered enough.”

The three stepped out through the door, and the bookseller pushed it shut. As they walked up the history aisle toward the front of the store, a long low sobbing moan came from the room behind them. 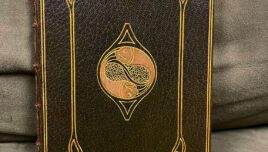 The dawn warms the cold house with golden light. For some minutes, every wall and every object glows... END_OF_DOCUMENT_TOKEN_TO_BE_REPLACED