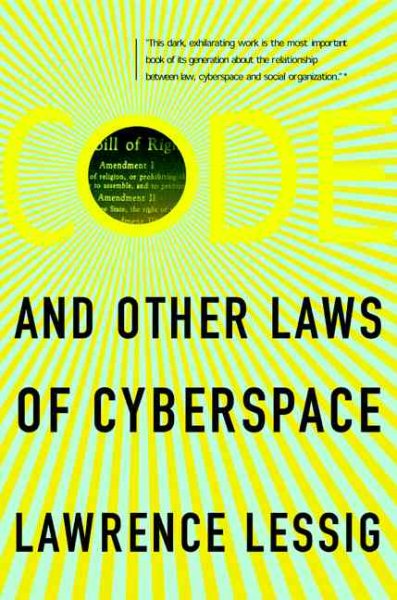 An expert on the legal aspects of the world of cyberspace explores such issues as free speech, intellectual property, and privacy within the world of computing and the Internet Read More
There’s a common belief that cyberspace cannot be regulated—that it is, in its very essence, immune from the government’s (or anyone else’s) control.Code argues that this belief is wrong. It is not in the nature of cyberspace to be unregulable; cyberspace has no “nature.” It only has code—the software and hardware that make cyberspace what it is. That code can create a place of freedom—as the original architecture of the Net did—or a place of exquisitely oppressive control.If we miss this point, then we will miss how cyberspace is changing. Under the influence of commerce, cyberpsace is becoming a highly regulable space, where our behavior is much more tightly controlled than in real space.But that’s not inevitable either. We can—we must—choose what kind of cyberspace we want and what freedoms we will guarantee. These choices are all about architecture: about what kind of code will govern cyberspace, and who will control it. In this realm, code is the most significant form of law, and it is up to lawyers, policymakers, and especially citizens to decide what values that code embodies. Read Less

Goodreads reviews for Code: And Other Laws Of Cyberspace

Remix: Making Art and Commerce Thrive in the Hybrid Economy

Code: And Other Laws of Cyberspace, Version 2.0