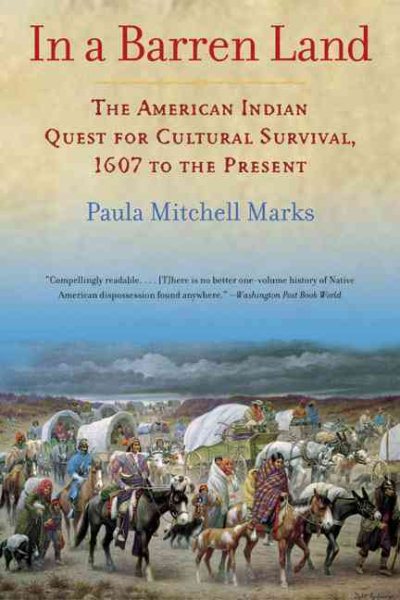 Chronicles how the U.S. government and white settlers took Native American land for their own use Read More
Award-winning historian Paula Mitchell Marks reconfirms her status as one of the foremost contemporary chroniclers of the American West with this often appalling, yet always engrossing, account of American Indian cultures under siege from 1607 to the present. In a dazzling synthesis of the latest research with masterful storytelling, Marks portrays the systematic dispossession of America's original inhabitants over centuries of broken promises and bloody persecutions. Well-known events and personalities -- the Battle of Little Big Horn, the Trail of Tears, Geronimo, to name a few -- are juxtaposed with lesser-known but equally pivotal episodes such as the Navajos' Long Walk, the Snake Indian resistance, and more. Read Less

Goodreads reviews for In a Barren Land: The American Indian Quest for Cultural Survival, 1607 to the Present

Precious Dust: The Saga of the Western Gold Rush

An Instance of the Fingerpost