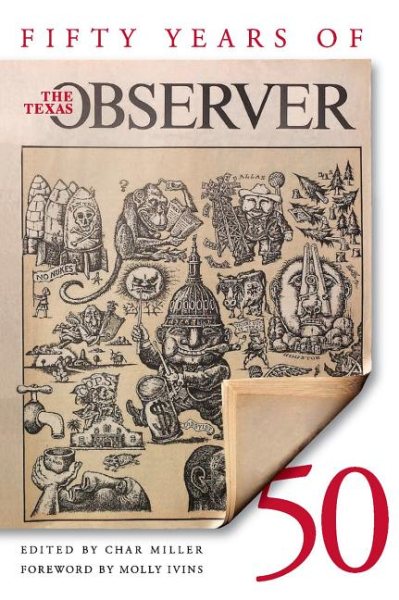 The authors assemble a selection of writing from the last fifty years of The Texas Observer, a renowned left-leaning newspaper in Austin Texas, showcasing the counterweight to mainstream politics in the notoriously conservative Lone Star State. Read More
For the past five decades the Texas Observer has been an essential voice in Texas culture and politics, championing honest government, civil rights, labor, and the environment, while providing a platform for many of the state’s most passionate and progressive voices. Included are ninety-one selections from Roy Bedichek, Lou Dubose, Ronnie Dugger, Dagoberto Gilb, Jim Hightower, Molly Ivins, Larry McMurtry, Maury Maverick Jr., Willie Morris, Debbie Nathan, and others.To mark the Observer’s fiftieth anniversary, Char Miller has selected a cross section of the best work to appear in its pages. Not only does the collection pay homage to an important alternative voice in Texas journalism, it also serves as a progressive chronicle of a half-century of life in the Lone Star State?a state that has spawned three presidents in the last forty years. If Texas is, as some say, a crucible for national politics, then Fifty Years of the Texas Observer can be read as a casebook for issues that concern citizens in all fifty states.Molly Ivins's foreword gives historical background for the Observer and sets the stage for the book. Read Less

Goodreads reviews for Fifty Years of the Texas Observer

Sugar's Life in the Hood: The Story of a Former Welfare Moth...

The Politics of Deceit: Saving Freedom and Democracy from Ex...