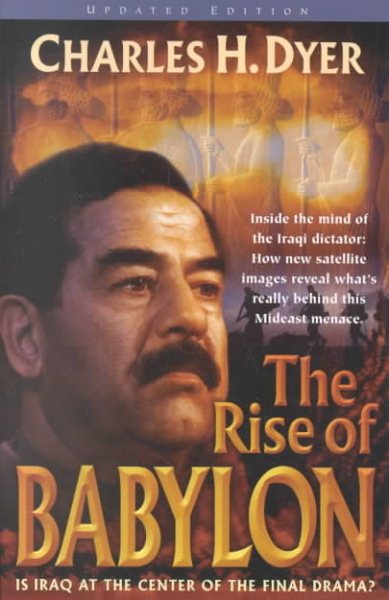 Argues that Saddam Hussein is rebuilding the ancient city of Babylon and questions the Iraqui dictator's motives in an examination of the current Middle East crisis and its relationship to biblical prophecy. Read More
Startling New Satellite Photos show how Saddam Hussein is rebuilding the ancient city of Babylon!Charlie Dyer documents the history of Iraq over the lastseveral decades and Saddam Hussein's three goals forIraq; territory, economic power and the elimination of thenation of Israel. The Rise of Babylon documents the similarities of the ancient empire of Babylon under King Nebuchadnezzar and the new Babylon being rebuilt by Saddam Hussein.Rows and rows of soldiers parade in, dressed in Babylonian tunics and carrying swords, spears, and shields. Interspersed among the ranks of soldiers are groups of musicians playing harps, horns, and drums. Clusters of children carry palm branches and runners bear bowls of incense. Then come soldiers and still more soldiers in a seemingly endless line of men and weapons. After the procession, the guests attend a ceremony paying tribute to Ishtar, the mother goddess of Babylon.Is this a scene of pagan worship from the time of Daniel? No, this is a scene I witnessed when I returned to Babylon in 1988 for the second International Babylon Festival held under the patronage of Saddam Hussein! - excerpt from The Rise of Babylon Read Less

Goodreads reviews for The Rise of Babylon: Sign of the End Times

The ISIS Crisis: What You Really Need to Know

What's Next?: God, Israel, and the Future of Iraq