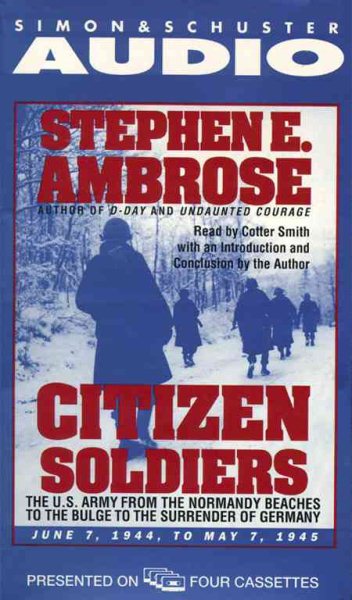 Draws on interviews with and oral histories of enlisted men and junior officers to examine the last year of World War II in Europe. Read More
Citizen Soldiers opens on June 7, 1944, on the Normandy beaches, and ends on May 7, 1945. From the high command (including Eisenhower, Bradley, and Patton) on down to the enlisted men, Stephen E. Ambrose draws on hundreds of interviews and oral histories from men on both sides who were there. He recreates the experiences of the individuals who fought the battles, the women who served, and the Germans who fought against us. Ambrose reveals the learning process of a great army -- how to cross rivers, how to fight in snow or hedgerows, how to fight in cities, how to coordinate air and ground campaigns, how to fight in winter and on the defensive, how citizens become soldiers in the best army in the world -- all from the point of view of the men. A masterful biography of the U.S. Army in the European Theater Of Operations, Citizen Soldiers provides a compelling account of the extraordinary stories of ordinary men in their fight for democracy. Read Less

Goodreads reviews for Citizen Soldiers : The U.S. Army from the Normandy Beaches to the Bulge to the Surrender of Germany -- June 7, 1944-May 7, 1945