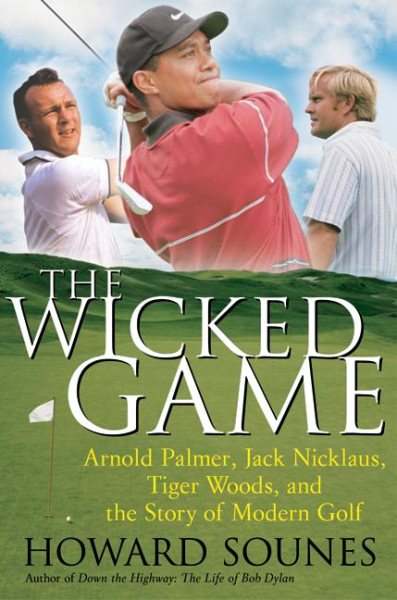 Traces the careers of Arnold Palmer, Jack Nicklaus, and Tiger Woods, with photographs and a chronological list of tournament wins. Read More
Golf is sometimes referred to as "the wicked game" because it is fiendishly difficult to play well. Yet in the parlance of the Tiger Woods generation, it's also a wickedly good game -- rich, glamorous, and more popular than ever.When we think about golf -- as it is played at its highest level -- we think of three names: Tiger Woods, the most famous sports figure in the world today, Arnold Palmer, the father of modern golf, and Jack Nicklaus, the game's greatest champion.In this penetrating, forty-year history of men's professional golf, acclaimed author Howard Sounes tells the story of the modern game through the lives of its greatest icons. With unprecedented access to players and their closest associates, Sounes reveals the personal lives, rivalries, wealth, and business dealings of these remarkable men, as well as the murky history of a game that has been marred by racism and sex discrimination. Among the many revelations, the complete and true story of Tiger Woods and his family background is untangled, uncovering surprising new details that inspire the golfer's father to exclaim, "Hell, you taught me some things about my life I never knew about!"Earl Woods and other members of Tiger Woods's family, his friends, girlfriends, caddies, coaches, and business associates were among the 150 people interviewed over two years of research. Others included Arnold Palmer and Jack Nicklaus, fellow champions such as Ernie Els, Gary Player, Tony Jacklin, and Tom Watson, and golf moguls such as Mark H. McCormack, billionaire founder of the sports agency IMG.The Wicked Game is a compelling story of talent, fame, wealth, and power. Entertaining for dedicated golfers, and accessible to those who only follow the game on television, this may be the most original and exciting sports book of the year. Read Less