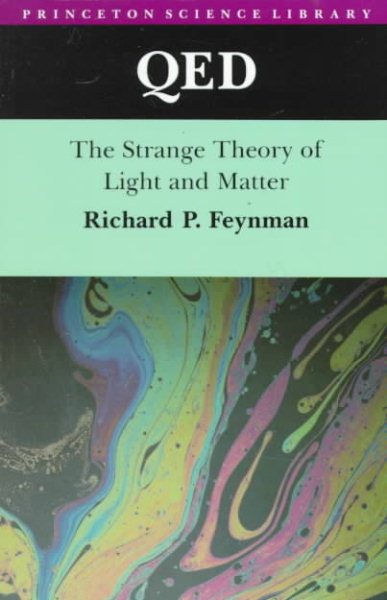 Explains the principles of quantum electrodynamics in terms understandable to layman Read More
Famous the world over for the creative brilliance of his insights into the physical world, Nobel Prize-winning physicist Richard Feynman also possessed an extraordinary talent for explaining difficult concepts to the nonscientist. QED--the edited version of four lectures on quantum electrodynamics that Feynman gave to the general public at UCLA as part of the Alix G. Mautner Memorial Lecture series--is perhaps the best example of his ability to communicate both the substance and the spirit of science to the layperson.The focus, as the title suggests, is quantum electrodynamics (QED), the part of the quantum theory of fields that describes the interactions of the quanta of the electromagnetic field-light, X rays, gamma rays--with matter and those of charged particles with one another. By extending the formalism developed by Dirac in 1933, which related quantum and classical descriptions of the motion of particles, Feynman revolutionized the quantum mechanical understanding of the nature of particles and waves. And, by incorporating his own readily visualizable formulation of quantum mechanics, Feynman created a diagrammatic version of QED that made calculations much simpler and also provided visual insights into the mechanisms of quantum electrodynamic processes. In this book, using everyday language, spatial concepts, visualizations, and his renowned "Feynman diagrams" instead of advanced mathematics, Feynman successfully provides a definitive introduction to QED for a lay readership without any distortion of the basic science. Characterized by Feynman's famously original clarity and humor, this popular book on QED has not been equaled since its publication. Read Less

Goodreads reviews for QED: The Strange Theory of Light and Matter

Surely You're Joking Mr Feynman: Adventures of a Curious Cha...

What Do You Care What Other People Think: Further Adventures...