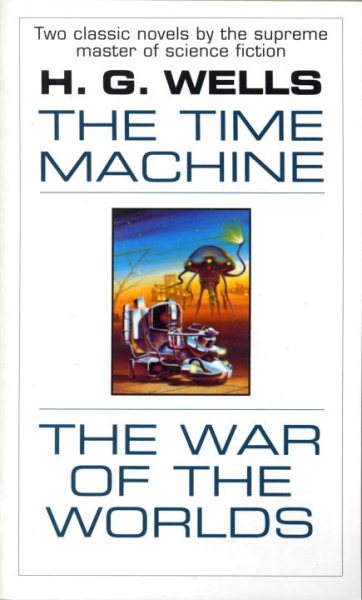 Presents the science-fiction master's two futuristic tales designed to assault the serenity of the self-satisfied Victorians Read More
The Time Machine When the Time Traveller courageously stepped out of his machine for the first time, he found himself in the year 802,700—and everything had changed. In this unfamiliar, utopian age creatures seemed to dwell together in perfect harmony. The Time Traveller thought he could study these marvelous beings—unearth their secret and then return to his own time—until he discovered that his invention, his only avenue of escape, had been stolen. H. G. Wells’s famous novel of one man’s astonishing journey beyond the conventional limits of the imagination first appeared in 1895. It won him immediate recognition and has been regarded ever since as one of the great masterpieces in the literature of science fiction. The War of the Worlds H. G. Wells’s science fiction classic, the first novel to explore the possibilities of intelligent life from other planets, is still startling and vivid nearly a century after its appearance, and a half century after Orson Welles’s infamous 1938 radio adaptation. This daring portrayal of aliens landing on English soil, with its themes of interplanetary imperialism, technological holocaust, and chaos, is central to the career of H. G. Wells, who died at the dawn of the atomic age. The survival of mankind in the face of “vast and cool and unsympathetic” scientific powers spinning out of control was a crucial theme throughout his work. Visionary, shocking, and chilling, The War of the Worlds has lost none of its impact since its first publication in 1898. Read Less

Goodreads reviews for The Time Machine and The War of the Worlds: Two Novels in One Volume (Fawcett Premier Book)