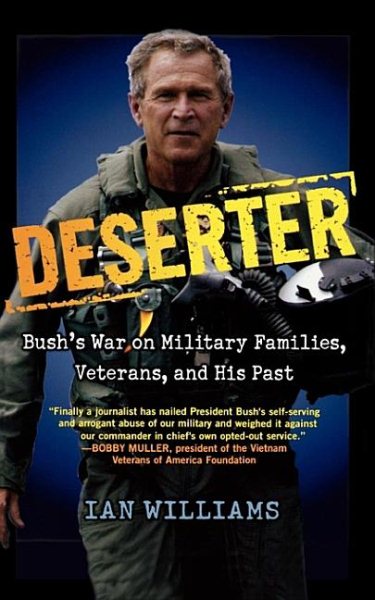 Drawing on extensive research on the president's still mysterious military career, Ian Williams argues that the would-be commander in chief is guilty of hypocrisy, cynical doublethink, and egregious neglect of the actual defense of the United States. Read More
Deserter looks objectively at the military record of George W. Bush, his role in the armed forces, and his treatment of them. Over the past year, Bush’s military poses have been contrived to convince the American public that he is a National Security President. Others have found his playacting less convincing. While George W. Bush supported the Vietnam War, his contribution was to enlist in a nepotistic unit of the Texas National Air Guard, which, short of World War III, was guaranteed never to see military action. Even in this safe position, Lieutenant Bush broke under the strain and went AWOL for the best part of a year. In contrast, American National Guardsmen have not only been called up for frontline action in Iraq, but they have had their terms of service extended. While the military budget soars, the war is being fought with a dangerously inadequate number of troops. The dead and disabled are shipped home under cover of darkness; those who eventually return in one piece find that their veterans’ medical benefits and facilities are being axed. Deserter strips away the illusion of Bush as ?commander-in-chief” to reveal a hypocrite who has betrayed his troops and his country. Read Less

Goodreads reviews for Deserter: Bush's War on Military Families, Veterans, and His Past

A Man in Full: A Novel