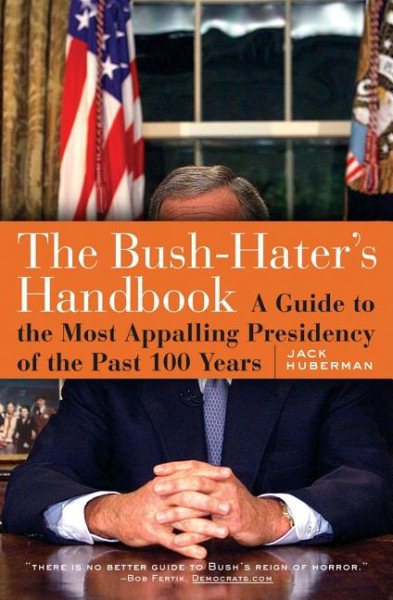 A Canadian national who became a U.S. citizen just so he could vote against George Bush offers a guide to the White House, listing his reasons to loath the current president, from his views on abortion to the Alaska Wildlife Preserve. Read More
The Bush-Haters Handbook is a godsend to those looking for a concise, mordantly entertaining overview of the Bush record from a liberal perspective, or those who want to arm themselves with talking points, facts, and figures for debates with conservatives, and at those seeking the perfect holiday gift book for that certain, special Bush-hater in their lives?or for a Bush-lover they hope to rescue from the outer darkness. Summarizing, detailing, and bewailing all of the more important Bush administration outrages, and some of the more trivial ones, this book is the brainchild of Jack Huberman, a former Canadian who took up U.S. citizenship just so he could vote against Dubya in 2000. Topics range from abortion, AIDS, Arctic National Wildlife Refuge, and Ashcroft, to women and workplace safety. Other major topics include budget and taxes, civil liberties, death penalty, defense spending, education, environment, gun control, health care, homeland security, Iraq, judicial nominations, ?nucular” weapons, patients’ rights, privacy, public land, September 11 and the war on terror, and social security. In between are a variety of smaller topics, such as Bush’s language abilities (featuring a selection of priceless Bushisms). The pages are also enlivened by sidebars, ?boxed” lists, and political cartoons. Read Less

Goodreads reviews for The Bush-Haters Handbook: A Guide to the Most Appalling Presidency of the Past 100 Years

Bushit!: An A-Z Guide to the Bush Attack on Truth, Justice,...

A Man in Full: A Novel