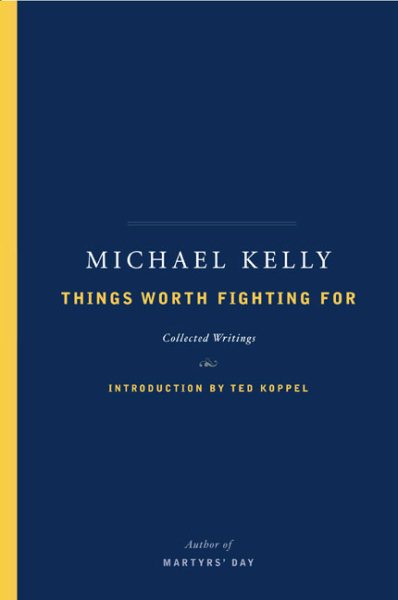 Presents a collection of magazine and newspaper stories, articles, and columns by the notable journalist, who was killed in 2003 while covering the Iraq war. Read More
The collected articles and columns of Michael Kelly, award-winning reporter, war correspondent, columnist, and editor, whose passion for the good story and whose candor and wit made him one of the foremost journalists of our time. Michael Kelly called himself a "colored lights" sort of person-a regular guy, not a member of the elite "white light" crowd-when it came to his holiday decorations, his writing, and his zest for life. His career reflected myriad colors: he wrote for a large variety of publications, covering a multitude of topics-political, international, and personal-with singular insight, passion, and wit. This collection of his most memorable magazine and newspaper stories and columns-drawn from the Washington Post, New York Times, The New Yorker, The New Republic, and other publications-puts on full display the dazzling panoply of his gifts: for physical description and scene setting; for telling detail, brilliant simile, and satirical insight; for prose that is at once mathematically precise and lyrical. Here are the searing portraits of Ted Kennedy, Jesse Jackson, H. Ross Perot, and other seminal political figures of our time that won Kelly national attention. Here are the stunning dispatches from the first Gulf War that earned him the National Magazine Award for reporting and burnished his journalistic legend. Here are the fierce columns and landmark cover stories that raised disturbing questions about Bill Clinton, Hillary Rodham Clinton, and the deeply incestuous relationship between Washington, D.C.'s political and media cultures. And here are the loving family portraits and hilarious social commentaries. Colored Lights represents the body of work of a journalist who demonstrated time and again a surpassing talent for penetrating to the heart of the matter, for advancing far beyond the headlines and surface appearances of people and events to find their true meanings, for getting the story other writers missed and telling it with a verve few other writers could match. Read Less

Goodreads reviews for Things Worth Fighting for: Collected Writings