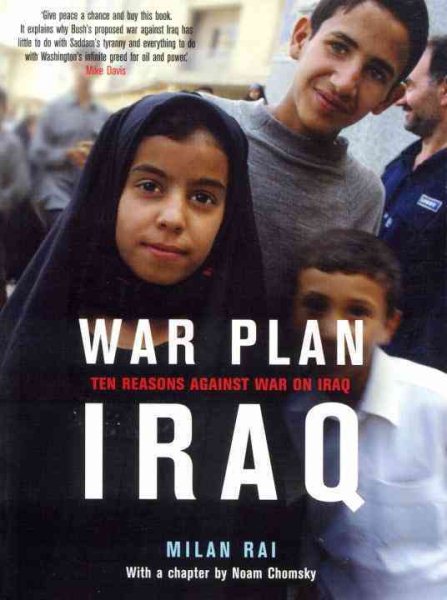 Brilliantly persuasive and never dull, this book is essential reading for anyone who cares about peace and democracy. Read More
War Plan Iraq brings together the arguments that can shake President Bush and Prime Minister Blair’s determination to start an illegal war with Iraq. Despite Washington’s claims that the only options are inaction or invasion and that ‘inaction is not an option’, War Plan Iraq demonstrates that inspection is an option, and that inspection and monitoring are the only way to ensure real disarmament in Iraq. For the Bush Administration, UN weapons inspectors are an obstacle to war; they are part of the problem, not part of the solution. War Plan Iraq uncovers Washington’s hidden role in the collapse of the first UN weapons inspection agency, UNSCOM, and the paralysis of UNSCOM’s successor, UNMOVIC. Based on the popular ‘ARROW Anti-War briefings’, War Plan Iraq rigorously dissects official propaganda and exposes government lies. This book demonstrates that the Bush’s claims to change the regime in Iraq, despite intentions to impose another Sunni general to replace Saddam Hussein, are not in fact a ‘regime change’, but a ‘leadership change’. It also shows that the war would be in violation of international law; that there is no hard evidence that Iraq possesses any weapons of mass destruction; that there is no substantiated connection between the Government of Iraq, September 11th, and the al Qaeda network; that the proposed war carries a high risk of triggering a humanitarian disaster in Iraq, especially for the Kurds of northern Iraq; and that the war could precipitate a world recession with dire consequences for the world’s poor. Iraq’s neighbors, the ones most at risk from Iraq’s weapons, are against the proposed war, as are top military professionals in Britain and the US, many international organizations and countries around the world, and a great majority of people in the US and the UK. Read Less

A Density of Souls