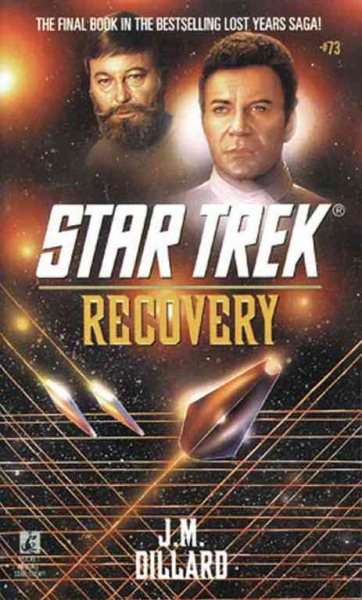 The conclusion to the Lost Years saga finds Admiral James T. Kirk supervising the testing of a new rescue vessel and realizing his irresistible need for adventure, just before the ship's creator falls under alien influence Read More
The Long Awaited Final Book In The Lost Years Saga! Recovery It began with The Lost Years: the story of what happened to Captain Kirk and the legendary crew of the U.S.S Enterprise? when their original five -year mission ended. The saga continued in A Flag Full Of Stars and Traitor Winds. Now, in Recovery, J.M. Dillard brings to an end one of the most exciting chapters in STAR TREK®history! Admiral James T. Kirk, former Captain of the U.S.S Enterprise and now Chief of Starfleet Operations, is at a crossroads in his career. When he is assigned to supervise the testing of the U.S.S. Recovery, an experimental new rescue vessel, he begins to realize how tired he is of being trapped behind a desk, away from the action. Fully automated, the Recovery is a high-speed transport vessel capable of evacuating large populations without risking the lives of Starfleet personnel. But when its creator falls under alien influence, the Recovery becomes a pawn in a deadly game that could lead to interstellar war. Trapped in the bowels of the ship Admiral Kirk's old friend Dr. Leonard "Bones" McCoy, who is being hunted by a homicidal madman determined that no one on the ship will survive. Taking command of a starship, Admiral Kirk must find a way to save Dr. Mckoy's life -- and save the galaxy from deadly chaos! Read Less

Resistance (Star Trek: The Next Generation)