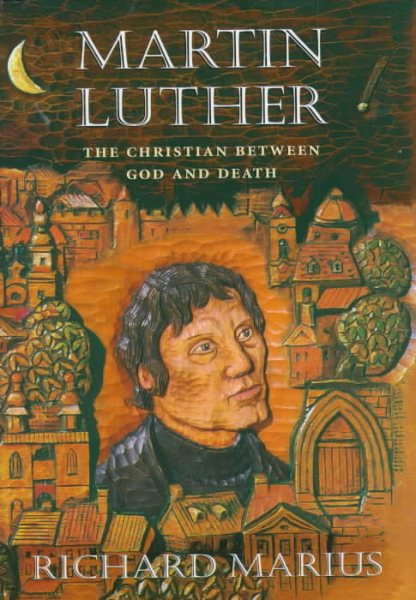 Documents the darker side of Luther's psyche, charging that the reformer's profound fear of death fueled the reformation and plunged Europe into an age of religious intolerance Read More
Few figures in history have defined their time as dramatically as Martin Luther. And few books have captured the spirit of such a figure as truly as this robust and eloquent life of Luther. A highly regarded historian and biographer and a gifted novelist and playwright, Richard Marius gives us a dazzling portrait of the German reformer--his inner compulsions, his struggle with himself and his God, the gestation of his theology, his relations with contemporaries, and his responses to opponents. Focusing in particular on the productive years 1516-1525, Marius' detailed account of Luther's writings yields a rich picture of the development of Luther's thought on the great questions that came to define the Reformation. Marius follows Luther from his birth in Saxony in 1483, during the reign of Frederick III, through his schooling in Erfurt, his flight to an Augustinian monastery and ordination to the outbreak of his revolt against Rome in 1517, the Wittenberg years, his progress to Worms, his exile in the Wartburg, and his triumphant return to Wittenberg. Throughout, Marius pauses to acquaint us with pertinent issues: the question of authority in the church, the theology of penance, the timing of Luther's "Reformation breakthrough," the German peasantry in 1525, Müntzer's revolutionaries, the whys and hows of Luther's attack on Erasmus. In this personal, occasionally irreverent, always humane reconstruction, Luther emerges as a skeptic who hated skepticism and whose titanic wrestling with the dilemma of the desire for faith and the omnipresence of doubt and fear became an augury for the development of the modern religious consciousness of the West. In all of this, he also represents tragedy, with the goodness of his works overmatched by their calamitous effects on religion and society. Read Less

Goodreads reviews for Martin Luther: The Christian between God and Death

A Short Guide to Writing About History

The Coming of Rain

Short Guide to Writing About History, A (6th Edition)