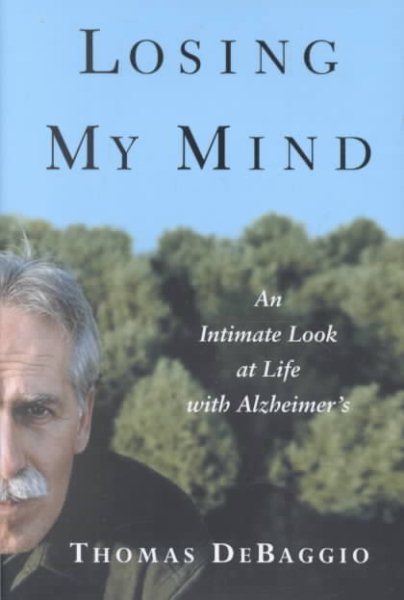 At once an autobiography, a medical history, and a testament to the beauty of memory, a writer diagnosed with Alzheimer's disease a few months after his 57th birthday depicts the joys of life and how one can take them for granted. Read More
When Tom DeBaggio turned fifty-seven in 1999, he thought he was about to embark on the relaxing golden years of retirement -- time to spend with his family, his friends, the herb garden he had spent decades cultivating and from which he made a living. Then, one winter day, he mentioned to his doctor during a routine exam that he had been stumbling into forgetfulness, making his work difficult. After that fateful visit, and a subsequent battery of tests over several months, DeBaggio joined the legion of twelve million others afflicted with Alzheimer's disease. But under such a curse, DeBaggio was also given one of the greatest gifts: the ability to chart the ups and downs of his own failing mind. Losing My Mind is an extraordinary first-person account of early onset Alzheimer's -- the form of the disease that ravages younger, more alert minds. DeBaggio started writing on the first day of his diagnosis and has continued despite his slipping grasp on one of life's greatest treasures, memory. In an inspiring and detailed account, DeBaggio paints a vivid picture of the splendor of memory and the pain that comes from its loss. Whether describing the happy days of a youth spent in a much more innocent time or evaluating how his disease has affected those around him, DeBaggio poignantly depicts one of the most important parts of our lives -- remembrance -- and how we often take it for granted. But to DeBaggio, memory is more than just an account of a time long past, it is one's ability to function, to think, and ultimately, to survive. As his life becomes reduced to moments of clarity, the true power of thought and his ability to connect to the world shine through, and in DeBaggio's case, it is as much in the lack of functioning as it is in the ability to function that one finds love, hope and the relaxing golden years of peace. At once an autobiography, a medical history and a testament to the beauty of memory, Losing My Mind is more than just a story of Alzheimer's, it is the captivating tale of one man's battle to stay connected with the world and his own life. Read Less

Goodreads reviews for Losing My Mind: An Intimate Look at Life with Alzheimer's

Losing My Mind: An Intimate Look at Life with Alzheimer's

Losing my Mind: An Intimate Look at Life with Alzheimer's