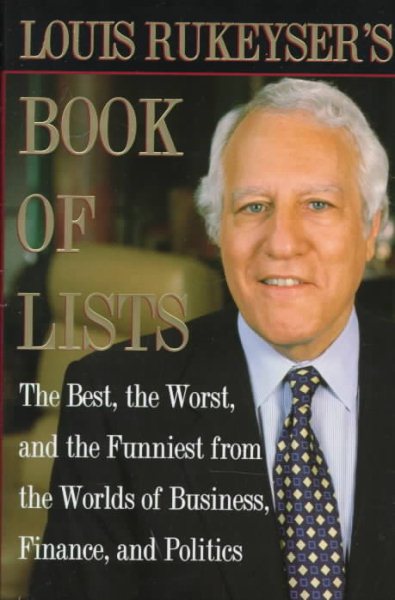 Shares more than 150 top-ten lists on all aspects of business, including mutual funds, the stock market, Wall Streeters in prison, and silly federal regulations Read More
Where are the top places in America to avoid bankers? Where are the healthiest places to live? What were the worst-performing NASDAQ stocks last year? And the best-performing? Who are the most generous people in America? What is the cost per victory in Major League Baseball? And in the NBA? Who are the highest-paid female executives? What is your risk of being audited by the IRS? What are some of the silliest laws in America? Which are America's fastest-growing companies?The answers to these questions comprise just the merest fraction of the diverse and entertaining information in Louis Rukeyser's Book of Lists. Numbering 185 in all, these lists indicate the best, the worst, and the funniest from the worlds of business, finance, and politics.To add further to readers' enjoyment, a number of men and women also from these worlds were invited to contribute their own lists, among them William Simon, Donald Rumsfeld, Elaine Garzarelli, Arthur Levitt, Mary Farrell, Julius Westheimer, and Charles Schwab. Read Less

What's Ahead for the Economy: The Challenge and the Chance

How to make money in Wall Street

ALL YOU WANT TO KNOW ABOUT: SECRETS OF THE GREAT I: Money Ma...