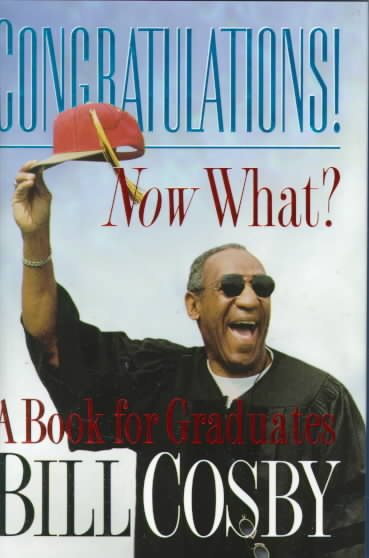 Offers a humorous look at college life, writing resumes, looking for a job, talking with recruiters, and the responsibilities of "real life" Read More
Just as a spoonful of sugar helps the medicine go down, so a spoonful of humor helps the wisdom go down. In Congratulations! Now What?, America's funnyman Bill Cosby gently ribs college graduates about their time spent--or lost--in the hallowed halls of the university and postulates what four years of higher education have suited them for: "[If no job offer] ever turns up with a four-day week, a three-hour lunch, and a holiday for Count Basie's birthday, you still might be able to make a few dollars on Jeopardy." But he also assures graduates that their studies were not in vain and bestows advice to job seekers. Those who acquired several piercings while in school are cautioned to make sure the studs and hoops are shined before going to an interview. Those who are buffing their first professional résumé are advised to strike a tone somewhere between "lyrical lying and fanciful fraud." Cosby, whose successful career as a humorist has always turned on his affection for kids, is a regular speaker at college commencements--in the chapter "As I Look Out at Your Foggy Faces," he says it's a hobby of his--and this 130-page book collects bons mots and sage advice from speeches given because he has "a feeling for anesthesiology."Graduates--and their now-broke parents--will find a reason to smile on every page. --Brenda Pittsley Read Less

Goodreads reviews for Congratulations! Now What?: A Book for Graduates

Cosby and the Kids [LP VINYL]

The Worst Day of My Life (Little Bill)