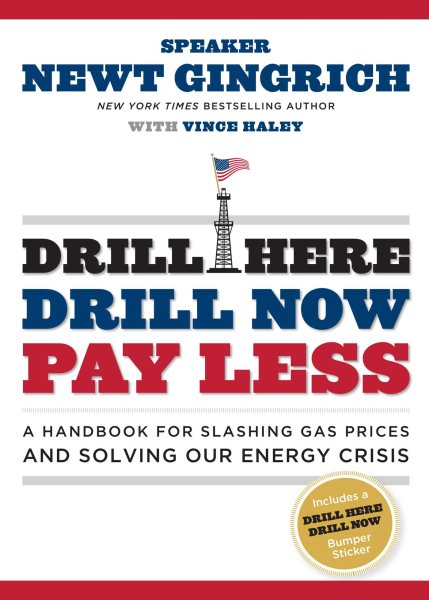 Newt Gingrich, former Speaker of the House and bestselling author, spells out in stunning simplicity a bold plan for America's energy independence. Read More
New York Times bestselling author, former Speaker of the House, and Fox News political analyst Newt Gingrich has a plan for slashing gas prices and reducing our long-term dependence on foreign oil.Gingrich is famous for taking big, visionary ideas and boiling them down into practical solutions as demonstrated in this year's earlier release, Real Change, which was on the New York Times bestseller list for eleven weeks. His new book Drill Here, Drill Now, Pay Less does just that. Dealing not only with spiraling gas prices, but with the energy crisis as a whole, Gingrich shows how we can safely reap the benefits of America's own natural resources and technology in gas, oil, coal, wind, solar, biofuels and nuclear energy.Gingrich argues that the pinch Americans are feeling at the pump is not a blip in the economy but a looming crisis--affecting not only the price of gas, but the price of food, the strength of our economy, and our national security.To meet this crisis, Gingrich lays out a national strategy that will tap America's scientists, engineers, and entrepreneurs, and require Congress to unlock our oil reserves and remove all the impediments and disincentives that unnecessary government regulation has put in the way of American energy independence. The energy crisis is solvable, as Newt Gingrich's plan makes clear. His handbook, Drill Here, Drill Now, Pay Less is sure to become the talk of the presidential campaign season. Read Less

Trump's America: The Truth about Our Nation's Great Comeback