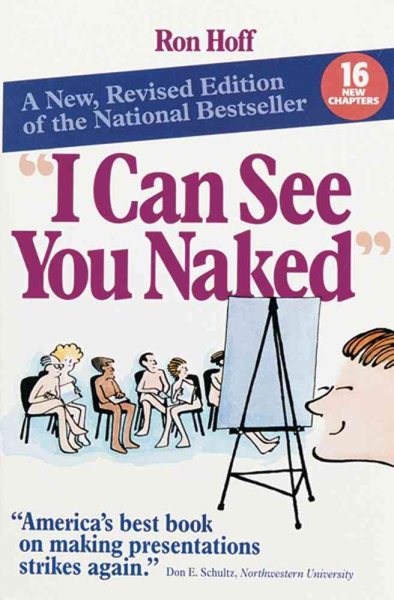 A complete guide to public speaking describes the qualities of a good presenter and discusses openings, nervousness, boredom, audiences, and question handling Read More
This may be the best piece of advice in this book:When something strikes you as funny, don't let it get away. Hold on to it for dear life. It could be gold. My theory is this: Everything that strikes you as funny is going to turn up on television some day.I'll just give you this one example—because it relates directly to the book you're reading.For as long as I can remember, I've always thought that the old idea of visualizing an audience naked, as a way to control nervousness, was a funny sort of notion. It just struck me funny.I mean, it's not one of those ideas that flits in and out of your mind. It sticks. And it asks for some kind of response.So, I made it the title of a book on presentations.I Can See You Naked.Need I tell you what happened next?The idea spread across the networks like a giggle through a classroom. Millions upon millions of people are howling their heads off about this quirky notion of speakers talking to naked audiences. It's hilarious. Dynamite. A TV writer's dream come true.Then, amidst the laughter, a question hit me: Had my book unleashed all of this hilarity?Surely not. But how many speakers would now visualize their next audience in a state of dishabille? I shuddered to think of it.If you're a presenter, a naked audience is not going to improve your concentration. Eye contact is going to be a real problem for you. And you're going to be very self-conscious about that $600 designer suit you're wearing.This was all dutifully explained in I Can See You Naked—the first edition. But something told me it was time for new emphasis. Even with the relaxed morality that pervades our TV sets and movie screens, there remains a statement that must be resaid:Never speak to a naked audience. It can be distracting.There are all kinds of other psychological exercises that can be tapped to rid yourself of nervousness in the face of an awaiting audience. One woman even wrote to tell me that Chapter 13, which starts, "It's the night before your big presentation" enabled her to keep her sanity. Can you imagine? I considered changing the title of the book to reflect that thought, then decided that a promise of sanity was probably more that I could deliver—times being what they are.As with the first edition, this expanded edition is dedicated to helping you be a better presenter. But it is also dedicated to candor, to saying things that—for one reason or another—never show up in other books on presentation.Who else would tell you "to keep an eye out for the barracuda?" (Chapter 51). Who else would tell you that "you may have been in the wrong place at the wrong time?" (Chapter 17). Who else would employ the Mafia to give you a pointer or two on presentations? (Chapter 31).In short, this is a very different book on presentations. It's even different from the first edition of I Can See You Naked, which still strikes me as a funny notion, great for sitcoms—but now there are other things to laugh about, look at, learn from, and try as you get ready to make your next presentation. Read Less

Goodreads reviews for I Can See You Naked

Say It in Six: How to Say Exactly What You Mean in Six Minut...

Do Not Go Naked Into Your Next Presentation: Nifty Little Nu...

I Can See You Naked: A Fearless Guide to Making Great Presen...