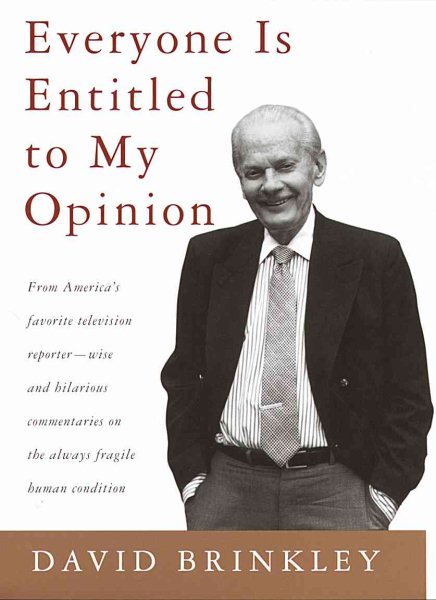 In a collection of 180 short essays, commentaries, and other writings, the distinguished journalist shares his thoughts on politics, human foibles, and the falsities of contemporary American life Read More
No matter how seriously we take our politics, Americans love a light touch, a raised eyebrow, a generous chuckle - which is why millions of us tune in to Sunday morning television for the bracing cocktail of wit and practical wisdom dispensed, along with the news, by the inimitable David Brinkley. His closing remarks, like an exclamation point after each broadcast, may illuminate the week's events or they may range widely through the oft-puzzling human condition - but they're always worth waiting for.In this one-of-a-kind book, we get the undiluted Brinkley. He marvels at government regulations that require paint cans to bear a label reading "Do not drink paint." He nominates Richard Nixon as Official U.S. Government Scapegoat. He commiserates with an Oklahoma mayor who must earn extra money by collecting beer cans and claiming the deposits. He reminisces about a White House that welcomed casual picnickers on its lawn. He forgives George Bush for passing out in Tokyo. He observes that "if we can put a man on the moon, we could put Congress in orbit." He skewers lawyers, bureaucrats, Washington insiders, hypocrites of all stripes. He commemorates absurdity - and hence suffers fools gladly. Read Less

Goodreads reviews for Everyone Is Entitled to My Opinion

Brinkley's Beat: People, Places, and Events That Shaped My T...