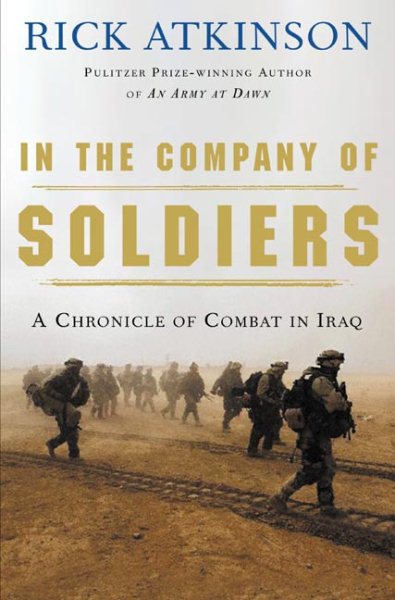 The author provides an eyewitness account of life on the front lines in Iraq with a portrait of the remarkable soldiers and leaders of the 101st Airborne Division. Read More
From Pulitzer Prize winner and bestselling author Rick Atkinson comes an eyewitness account of the war against Iraq and a vivid portrait of a remarkable group of soldiers For soldiers in the 101st Airborne Division, the road to Baghdad began with a midnight flight out of Fort Campbell, Kentucky, in late February 2003. For Rick Atkinson, who would spend nearly two months covering the division for The Washington Post, the war in Iraq provided a unique opportunity to observe today's U.S. Army in combat. Now, in this extraordinary account of his odyssey with the 101st, Atkinson presents an intimate and revealing portrait of the soldiers who fight the expeditionary wars that have become the hallmark of our age. At the center of Atkinson's drama stands the compelling figure of Major General David H. Petraeus, described by one comrade as "the most competitive man on the planet." Atkinson spent virtually all day every day at Petraeus's elbow in Iraq, where he had an unobstructed view of the stresses, anxieties, and large joys of commanding 17,000 soldiers in combat. Atkinson watches Petraeus wrestle with innumerable tactical conundrums and direct several intense firefights; he watches him teach, goad, and lead his troops and his subordinate commanders. And all around Petraeus, we see the men and women of a storied division grapple with the challenges of waging war in an unspeakably harsh environment. With the eye of a master storyteller, the premier military historian of his generation puts us right on the battlefield. In the Company of Soldiers is a compelling, utterly fresh view of the modern American soldier in action. Read Less

Goodreads reviews for In the Company of Soldiers: A Chronicle of Combat