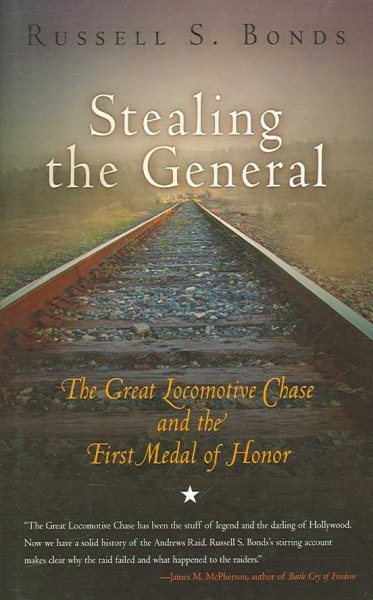 In April 1862, twenty Union soldiers crossed Confederate lines to destroy a critical Confederate supply line and steal a locomotive called the General, only half the team escaped and received the newly established Medal of Honor. Read More
Selected by Civil War Interactive as One of the Top Civil War Books of All Time"The definitive book about the Great Locomotive Chase."—Charlotte Observer"Magnificent and definitive."—Wall Street Journal"The Great Locomotive Chase has been the stuff of legend and the darling of Hollywood. Now we have a solid history of the Andrews Raid. Russell S. Bonds' stirring account makes clear why the raid failed and what happened to the raiders."—James M. McPherson, author of Battle Cry of Freedom, winner of the Pulitzer Prize"In this gripping, smooth-running account, Bonds zooms effortlessly from broad-stroke overviews of Civil War strategy to minute-by-minute scrutiny of unfolding events on the ground. He sets up the story with a quick, punchy outline of the first year of the war. What follows is a fast-paced, extremely well-told tale of espionage, capture, trial and escape."—Publishers Weekly (starred review)"Phenomenally well written, organized, and presented."—Civil War Books and AuthorsOn April 12, 1862—one year to the day after Confederate guns opened on Fort Sumter and started the Civil War—a tall, mysterious smuggler and self-appointed Union spy named James J. Andrews and nineteen infantry volunteers infiltrated north Georgia and stole a steam engine called the General. Racing northward at speeds approaching sixty miles an hour, cutting telegraph lines and destroying track along the way, Andrews planned to open East Tennessee to the Union army, cutting off men and matériel from the Confederate forces in Virginia. If they succeeded, Andrews and his raiders could change the course of the war. But the General's young conductor, William A. Fuller, chased the stolen train first on foot, then by handcar, and finally aboard another engine, the Texas. He pursued the General until, running out of wood and water, Andrews and his men abandoned the doomed locomotive, ending the adventure that would soon be famous as The Great Locomotive Chase. But the ordeal of the soldiers involved was just beginning. In the days that followed, the "engine thieves" were hunted down and captured. Eight were tried and executed as spies, including Andrews. Eight others made a daring escape to freedom, including two assisted by a network of slaves and Union sympathizers. For their actions, before a personal audience with President Abraham Lincoln, six of the raiders became the first men in American history to be awarded the Medal of Honor—the nation's highest decoration for gallantry.Americans north and south, both at the time and ever since, have been astounded and fascinated by this daring raid. But until now, there has not been a complete history of the entire episode and the fates of all those involved. Based on eyewitness accounts, as well as correspondence, diaries, military records, newspaper reports, deposition testimony and other primary sources, Stealing the General: The Great Locomotive Chase and the First Medal of Honor by Russell S. Bonds is a blend of meticulous research and compelling narrative that is now considered to be the definitive history of "the boldest adventure of the war." Read Less

Goodreads reviews for Stealing the General: The Great Locomotive Chase and the First Medal of Honor

Stealing the General: The Great Locomotive Chase and the Fir...

Divine Rest for Human Restlessness: A Theological Study of t...