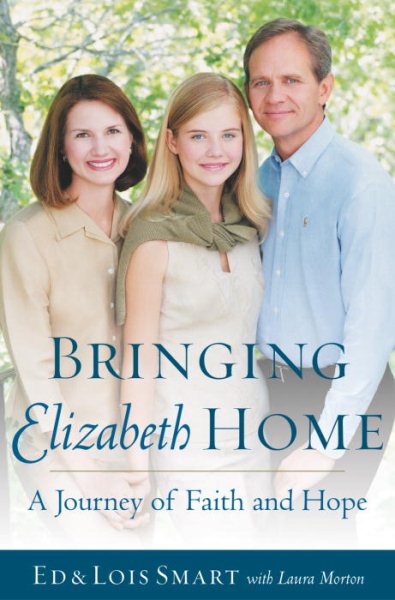 The parents of kidnapping victim Elizabeth Smart offer their perspective on the abduction of their daughter, discussing their long ordeal, the faith that kept them going, and their joy over the ultimate rescue of their daughter. Read More
At 3:58 in the morning of June 5, 2002, Ed and Lois Smart awoke to the sound of their nine-year-old daughter Mary Katherine’s frightened voice. “She’s gone. Elizabeth is gone.” At first they thought she was having a bad dream about her older sister, but Mary Katherine’s seeming bad dream would quickly become their worst nightmare. Their daughter Elizabeth was gone.They were not sure why the media picked up on Elizabeth’s story, but after their daughter was kidnapped she became the whole world’s daughter. After nine months of a strange, hard, sometimes rewarding, but mostly painful journey, Elizabeth was miraculously returned to them. Just as millions throughout the world had grieved for her loss, now they celebrated her safe return. In Bringing Elizabeth Home, Ed and Lois share the pain of every parent’s worst fear: “What would I do if my child was taken from me?” They also share a story of great hope, strong faith, and trust in God. The Smart family had always been devoted to their Mormon faith, but through their terribly painful experience they gained a tremendous inner strength, which became the key to their survival. They write, “Having our daughter back home, in our arms, is nothing short of a miracle. It is the ultimate proof that God answers prayers. Granted, sometimes the answer is not the one we pray for, but still it remains an answer. We feel truly blessed that He answered our prayers the way we had hoped for, although we realize, regretfully, that this is not always the outcome in kidnapping cases. We have met so many families with missing children and we’ve seen how deep their pain goes . . . But what we hope to convey through our journey of faith and hope is that with a strong belief in God, all things are possible. Miracles do happen.”In the end, the Smarts’ story brings one point poignantly home--nothing is more important in this world than family. Not money. Not work. Not a fancy new car or an expensive, big house. Family, the prayers of so many friends and strangers, and trust in God are what got them through this experience--and having survived, they have no doubt that they can persevere in any situation as long as those three things are in their lives. Though their story is filled with many incredible twists and turns, they never lost focus on what was important: bringing Elizabeth home. Read Less

Goodreads reviews for Bringing Elizabeth Home: A Journey of Faith and Hope