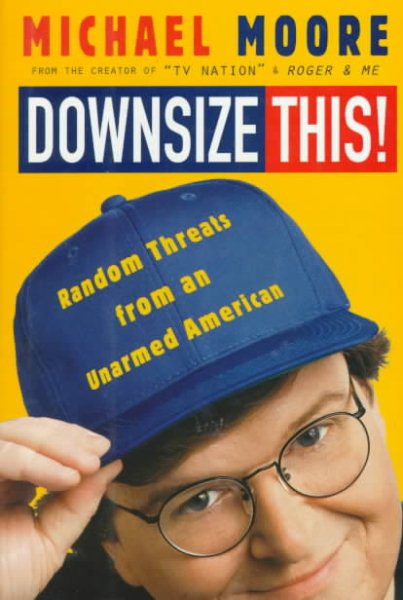 The author takes on the corporate and political powers that be, setting his sights on astronomical CEO salaries, downsizing for fun and profit, and other contemporary maladies Read More
Nothing but the truth is sacred in Michael Moore's hilarious screed on the state of America, Downsize This! With the same in-your-face tenacity that has made him everyman's hero, Moore gets under the skin of corporate giants, politicians, lobbyists, and the media - anyone who has made life tougher for the millions of Americans who are working longer hours for less pay and have had enough. Moore brings his wit and working-class voice to an American public desperate to save what's left of their American dream. His take-no-prisoners attitude is brutally funny, insightful, irrepressible. Whether he's lusting after the First Lady in "My Forbidden Love for Hillary Clinton" or sending campaign contributions to Pat Buchanan from the John Wayne Gacey Fan Club, conducting a Rodney King Commemorative Riot or trying to commit Congressman Bob Dornan to a mental hospital, issuing Corporate Crook Trading Cards, or encouraging Congress to take advantage of NAFTA by moving themselves to Tijuana, Michael Moore has the unique gift for making you think and laugh at the same time. He reflects an irreverent intelligence and biting humor so seldom heard in America today. Downsize This! is the perfect antidote to the mind-numbing throb of the election year. Read Less

Goodreads reviews for Downsize This!