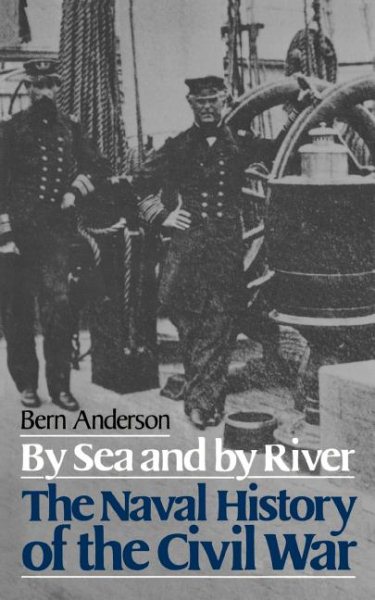 Looks at the main naval campaigns of the Civil War, discusses blockades and blockade runners, and includes profiles of naval leaders Read More
Less bloody and less known than the land campaigns of the Civil War, the naval battles--and especially the naval blockade of the South--were crucial factors in the outcome of the war. The spectacular battle between the Monitor and the Merrimack marked the debut of ironclads, a revolution in naval warfare. Ships supported McClellan's Peninsula Campaign and Grant's conquest of the Mississippi Valley. The raiding of the Confederate cruisers Sumter, Florida, and Alabama, Farragut's capture of the forts in Mobile Bay, and the interception of foreign ships on their way to trade with the South all led to the North's eventual triumph. Bern Anderson, a retired admiral, provides sketches of many of the leading characters in the action: Gideon Welles, David Farragut, Stephen Mallory, Andrew Foote, and the Confederate commander Raphael Semmes. Anderson delineates the new kind of war being born in the rivers and oceans of the U.S. during these years, in this first effective joint action by military and naval forces in American history. Read Less

Goodreads reviews for By Sea And By River: The Naval History of the Civil War (Da Capo Paperback)

The Life and Voyages of Captain George Vancouver: Surveyor o...

The Adventures of Sir Lancelot the Great (1) (The Knights’ T...

The Sibley Guide to Birds