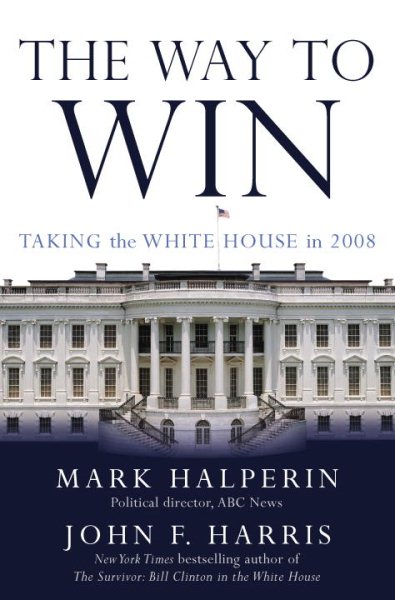 A look at the 2008 presidential election examines the roles of the Clinton and Bush families in American politics, reveals the strategies that Karl Rove has used to achieve successful election results, and explores how presidential campaigns are won and lost. Read More
In The Way to Win, two of the country’s most accomplished political reporters explain what separates the victors from the victims in the unforgiving environment of modern presidential campaigns.Mark Halperin, political director of ABC News, and John F. Harris, the national politics editor of The Washington Post, tell the story of how two families–the Bushes and the Clintons–have held the White House for nearly a generation and examine Hillary Clinton’s prospects for extending this record in 2008. Based on years of research, including private campaign memos and White House communications, The Way to Win reveals the surprising details of how the Bushes and Clintons have closely studied each the other’s successes and failures and used these lessons to shape their own strategies for winning elections and wielding power.In the case of George W. Bush, the strategic genius is Karl C. Rove, arguably the most influential White House aide in history. For the first time, Halperin and Harris cut through the myths and controversies surrounding Rove to illuminate in brilliant, behind-the-scenes detail what he actually does–his Trade Secrets for winning elections.In the case of the Clintons, the chief strategist is Bill Clinton himself. Drawing on their fifteen years reporting on and interviewing him, Halperin and Harris deconstruct and decipher the Clinton style, identifying the methods that all candidates can use in their pursuit of the White House.The Way to Win takes a lively and irreverent approach, but Halperin and Harris also show the disturbing ways that American politics has become a Freak Show–their name for a political culture that provides incentives for candidates, activists, interest groups, and the news media to emphasize ideological extremism and personal attack. For the first time, Halperin and Harris describe how Freak Show campaigns orchestrated by the likes of Internet pioneer Matt Drudge forced Al Gore and John Kerry to lose control of their public images (with considerable help from the candidates’ own ineptitude) and lose the White House.On the brink of what will be one of the most intense, most exciting presidential elections in American history, The Way to Win is the book that armchair political junkies have been waiting for. Filled with peerless analysis and eye-opening revelations from the trenches, it is a must read for everyone who follows American politics. Read Less

Goodreads reviews for The Way to Win: Taking the White House in 2008

Game Change: Obama and the Clintons, McCain and Palin, and t...