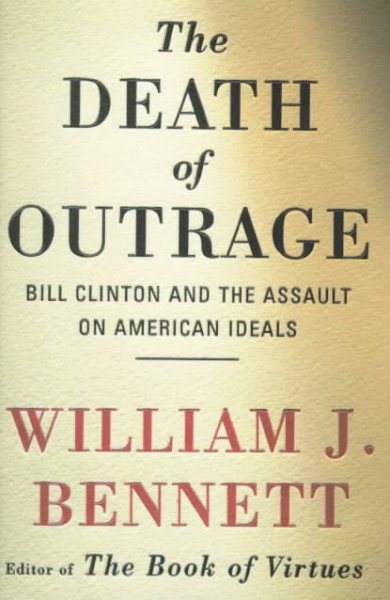 Explains why Americans should not excuse the President's improper behavior and the undermining of the moral leadership of his office Read More
Today we see little public outrage about Bill Clinton's misconduct. With enormous skill, the president and his advisors have constructed a defensive wall built of bricks left over from Watergate: diversion, half-truth, equivocation, and sophistry. It is a wall that has remained unbreached. Until now. In The Death of Outrage: Bill Clinton and the Assault on American Ideals, former cabinet secretary and bestselling author William J. Bennett dismantles the president's defenses, brick by evasive brick, and analyzes the meaning of the Clinton scandals: why they matter, what the public reaction to them means, and the social and political damage they have already inflicted on America. For, despite Bill Clinton's position in public opinion polls, the most persuasive public arguments made by the president's supporters wither under the clear light of moral reason and common sense. The Death of Outrage exposes the fallacious and demeaning logic that argues our economic well-being is the only important measure of presidential performance; torpedoes the deep but wholly unexamined respect for European sophistication about "private matters"; and explains why the president's troubles are not the result of a "vast, right-wing conspiracy," but are the result of his own doings. The Death of Outrage shows How the president's actions, far from being irrelevant to the conduct of his affairs, have severely restricted his ability to govern. The unprecedented recklessness of the Clinton administration in everything from influence peddling to sexual misconduct to alarming tactics of intimidation. How the president and his defenders have exploited the natural tolerance of the American people -- and made a mockery of the rule of law. Why the Clinton scandals -- from the Travel Office, to Filegate, to the Rose Law Firm billing records, to the Lewinsky Affair -- are neither a creation of the tabloid press, nor independent of one another. Bill Bennett explains why presidential character matters; why allegations of sexual misconduct need to be taken seriously; why reasoned judgment is the mark of a healthy democracy; and why the ends don't justify the means. Explosive and hard-hitting, powerful in its logic, carefully reasoned in its conclusions, The Death of Outrage is directed at a shameful chapter of American history. It is an urgent call for American citizens to repudiate the deep corruption of Bill Clinton, and the corrupting arguments made in his defense. Read Less

Goodreads reviews for Death of Outrage: Bill Clinton and the Assault on American Ideals