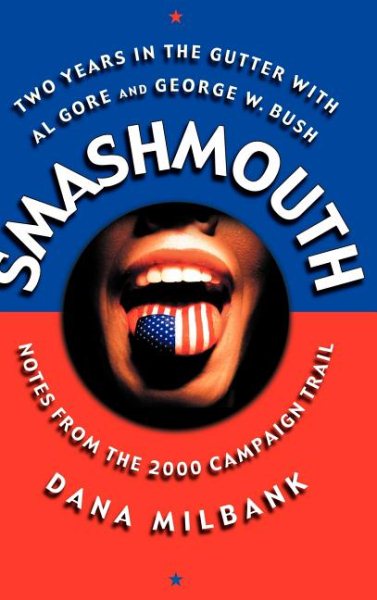 Follows the candidates of the 2000 presidential campaign from the primaries to election day, offering inside information on each candidate and their daily lives during the brutal campaign battle. Read More
Contrary to most media reports, negative campaigning is actually in decline, but our political system is no better off for it. Or so believes Washington Post political writer Dana Milbank, whose campaign book Smashmouth provides a witty yet ultimately very serious look at the sense and senselessness that occurred during the 2000 presidential campaign. What matters is not whether a campaign claim is positive or negative, but whether the claim is relevant," writes Milbank. "The press should police outright falsehoods, of course, but otherwise let the candidates fight it out." Traveling by bus, plane and motorcade with the candidates, Milbank provides an indelible behind-the-scenes look at the brutal skirmishes that made up this century's first presidential campaign. Read Less

Goodreads reviews for Smash Mouth: Two Years In The Gutter With Al Gore And George W. Bush -- Notes From The 2000 Campaign Trail

Tears of a Clown: Glenn Beck and the Tea Bagging of America