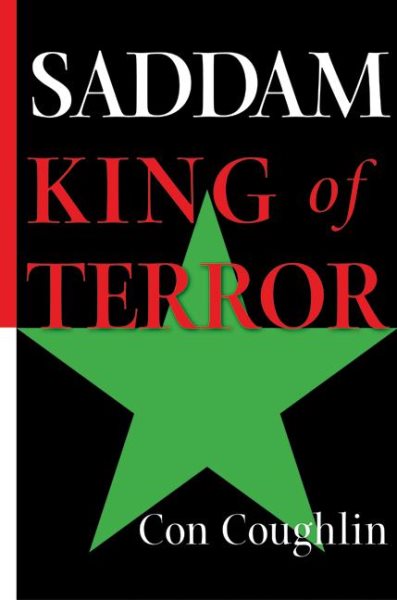 Drawn from intelligence gathered by Western governments and interviews with defectors, a biography of the Iraqi leader traces his life and discusses his role in international terrorism. Read More
An unprecedented biography, drawn from the author's exclusive access to high-ranking defectors, intelligence officials, and even Saddam's own relatives -- fully illustrated with photos from his early life to the presentTwo weeks before September 11, 2001, Saddam Hussein placed his troops on their highest military alert since the Gulf War. As al-Qaeda terrorists set their attacks on America in motion, the Iraqi dictator was prepared to go to war for a second time with the United States. How did an illegitimate child from Tikrit become the West's greatest adversary, and one of the most dangerous and murderous dictators of modem times?Saddam: King of Terror is the most insightful and illuminating portrait of the Iraqi president to date-and a fascinating study of the making of a tyrant. Con Coughlin, executive editor of London's award-winning Sunday Telegraph, has covered the Middle East for decades -- on the front lines, narrowly escaping kidnapping and violence. He has cultivated exclusive contacts among the Western intelligence community and numerous defectors from Saddam's inner circles -- including former generals, political associates, and bodyguards as well as childhood friends. Coughlin knew immediately that American and British declarations of war against terrorism after the September 11th attacks would sooner rather than later encompass Saddam Hussein as well as Osama bin Laden. Coughlin shows that any operation against terrorism will be incomplete as long as Saddam remains in power -- that international policies will have to change from cautious tolerance to active intervention, a change that is already becoming a reality.Coughlin also provides the first complete portrait of Saddam's childhood ever published, compiled from the author's inter-views with Saddam's contemporaries and relatives who have never before spoken publicly about him According to Coughlin, Saddam has a younger sister no one knew about, and he idolizes his mother, although his childhood was deeply marred by his shame about being fatherless. From his earliest years, he looked to his mother's brother as a father figure, and Coughlin tells how it was this uncle who first introduced Saddam to a life of crime and political rebellion. Saddam: King of Terror meticulously traces Saddam's bloody rise to power, from Saddam's first murder and his time in prison, to an eyewitness account of Saddam storming Iraqs presidential palace in a tank, to his almost feral ruthlessness in disposing of his opponents, even dose friends and relatives, to create his regime -- a complex mechanism in which family and tribe are central, held together by Saddam's carefully orchestrated reign of fear.In Saddam: King of Terror, we see both the bizarre, almost pathological behavior of an international pariah and the unshakable power of a tyrant who has defied the world's censure and holds a nation in his grasp. Read Less

Khomeini's Ghost: The Iranian Revolution and the Rise of Mil...