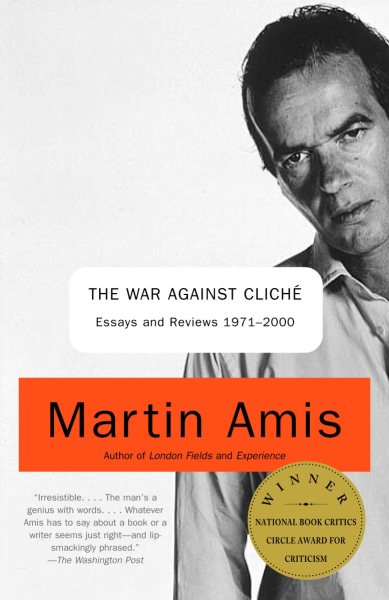 Compiles essays discussing, and in some cases condemning, such people and topics as movie violence, Margaret Thatcher, Charles Dickens, Michael Crichton, Vladimir Nabokov, Gore Vidal, poker, and world literature. Reprint. 25,000 first printing. Read More
Is there anything that Martin Amis can’t write about? In this virtuosic, career-spanning collection he takes on James Joyce and Elvis Presley, Nabokov and English football, Jane Austen and Penthouse Forum, William Burroughs and Hillary Clinton. But above all, Amis is concerned with literature, and with the deadly cliches–not only of the pen, but of the mind and the heart. In The War Against Cliché, Amis serves up fresh assessments of the classics and plucks neglected masterpieces off their dusty shelves. He tilts with Cervantes, Dickens and Milton, celebrates Bellow, Updike and Elmore Leonard, and deflates some of the most bloated reputations of the past three decades. On every page Amis writes with jaw-dropping felicity, wit, and a subversive brilliance that sheds new light on everything he touches. Read Less

Goodreads reviews for The War Against Cliche: Essays and Reviews 1971-2000