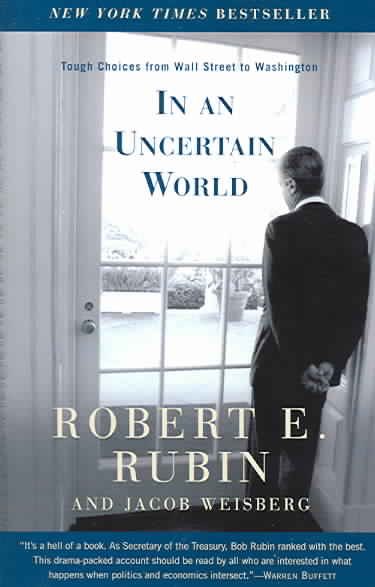 The former U.S. treasury secretary shares his thoughts on his career in the public and private sectors as he reflects on such issues as American economic policy, the political process, the global economy, and future challenges. Read More
Robert Rubin was sworn in as the seventieth U.S. Secretary of the Treasury in January 1995 in a brisk ceremony attended only by his wife and a few colleagues. As soon as the ceremony was over, he began an emergency meeting with President Bill Clinton on the financial crisis in Mexico. This was not only a harbinger of things to come during what would prove to be a rocky period in the global economy; it also captured the essence of Rubin himself--short on formality, quick to get into the nitty-gritty.From his early years in the storied arbitrage department at Goldman Sachs to his current position as chairman of the executive committee of Citigroup, Robert Rubin has been a major figure at the center of the American financial system. He was a key player in the longest economic expansion in U.S. history. With In an Uncertain World, Rubin offers a shrewd, keen analysis of some of the most important events in recent American history and presents a clear, consistent approach to thinking about markets and dealing with the new risks of the global economy.Rubin's fundamental philosophy is that nothing is provably certain. Probabilistic thinking has guided his career in both business and government. We see that discipline at work in meetings with President Clinton and Hillary Clinton, Chinese premier Zhu Rongji, Alan Greenspan, Lawrence Summers, Newt Gingrich, Sanford Weill, and the late Daniel Patrick Moynihan. We see Rubin apply it time and again while facing financial crises in Asia, Russia, and Brazil; the federal government shutdown; the rise and fall of the stock market; the challenges of the post-September 11 world; the ongoing struggle over fiscal policy; and many other momentous economic and political events.With a compelling and candid voice and a sharp eye for detail, Rubin portrays the daily life of the White House-confronting matters both mighty and mundane--as astutely as he examines the challenges that lie ahead for the nation. Part political memoir, part prescriptive economic analysis, and part personal look at business problems, In an Uncertain World is a deep examination of Washington and Wall Street by a figure who for three decades has been at the center of both worlds. Read Less

Goodreads reviews for In an Uncertain World: Tough Choices from Wall Street to Washington

In an Uncertain World: Tough Choices from Wall Street to Was...

Still More George W. Bushisms: "Neither in French nor in Eng...