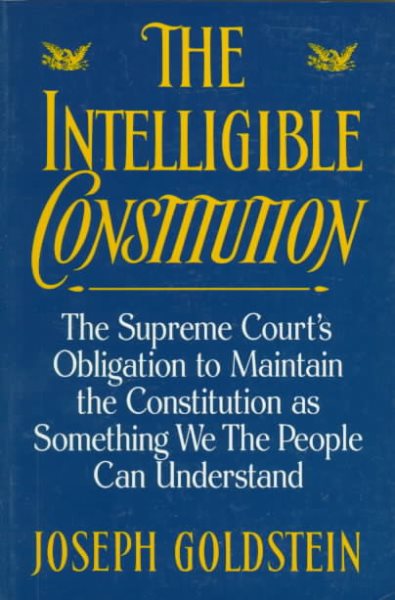 In Webster v. Reproductive Health Services, a critical abortion rights case, a bitterly di... Read More
In Webster v. Reproductive Health Services, a critical abortion rights case, a bitterly divided Supreme Court produced no less than six different opinions. Writing for the plurality, Chief Justice Rehnquist attacked the trimester framework established in Roe v. Wade because it was "not found in the text of the Constitution or in any place else one would expect to find a constitutional principle." This approach, writes legal authority Joseph Goldstein, confuses constitutional principles (in this case, the right to privacy) with the means to protect them (here, the trimester system). As a result, the Court left the public bewildered about the constitutional scope of a woman's right to reproductive choice--failing in its duty to speak clearly to the American public about the Constitution. In The Intelligible Constitution, Goldstein makes a compelling argument that, in a democracy based upon informed consent, the Supreme Court has an obligation to communicate clearly and candidly to We the People when it interprets the Constitution. After a fascinating discussion of the language of the Constitution and Supreme Court opinions (including the analysis of Webster), he presents a series of opinion studies in important cases, focusing not on ideology but on the Justices' clarity of thought and expression. Using the two Brown v. Board of Education cases, Cooper v. Aaron, Regents of the University of California v. Bakke, and others as his examples, Goldstein demonstrates the pitfalls to which the Court has succumbed in the past: Writing deliberately ambiguous decisions to win the votes of colleagues, challenging each others' opinions in private but not in public, and not speaking honestly when the writer knows a concurring Justice misunderstands the opinion which he or she is supporting. Even some landmark decisions, he writes, have featured seriously flawed opinions--preventing We the People from understanding why the Justices reasoned as they did, and why they disagreed with each other. He goes on to suggest five "canons of comprehensibility" for Supreme Court opinions, to ensure that the Justices explain themselves clearly, honestly, and unambiguously, so that all the various opinions in each case would constitute a comprehensible message about their accord and discord in interpreting the Constitution. Both a fascinating look at how the Court shapes its opinions and a clarion call to action, this book provides an important addition to our understanding of how to maintain the Constitution as a living document, by and for the People, in its third century. Read Less

Goodreads reviews for The Intelligible Constitution: The Supreme Court's Obligation to Maintain the Constitution as Something We the People Can Understand (Oxford Paperbacks)

First Practical Steps in Double Stopping for Violin - No. 26...

One Dharma: The Emerging Western Buddhism

The Experience of Insight: A Simple and Direct Guide to Budd...