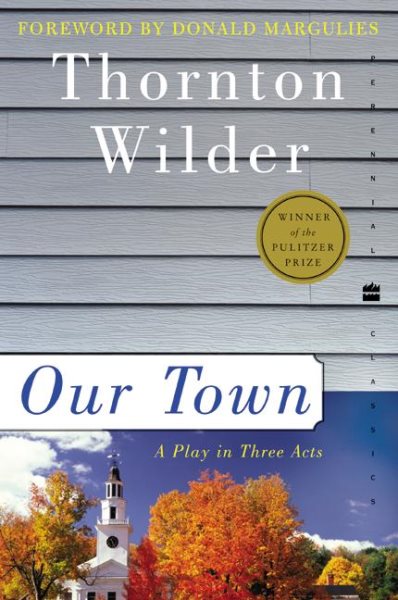 The author's Pulitzer Prize-winning drama portrays life in a small New Hampshire town during the early 1900s. Read More
“Wilder’s unfashionable insistence on embracing wonders as well as woe is both gallant and exhilarating. . . .[Our Town] leaves us with a sense of blessing, and the unspoken but palpable command to achieve gratitude in what remains of our days on earth.” — The New YorkerThis beautiful edition of Our Town features an eyeopening Afterword written by Tappan Wilder, Thornton Wilder's nephew, that includes Wilder's unpublished notes and other illuminating photographs and documentary material.Our Town was first produced and published in 1938 to wide acclaim. This Pulitzer Prize-winning drama of life in the small village of Grover's Corners, an allegorical representation of all life, has become an American classic. It is Thornton Wilder's most renowned and most frequently performed play. Read Less

Goodreads reviews for Our Town: A Play in Three Acts (Perennial Classics)

3 Plays; Our Town, The Skin of Our Teeth, The Matchmaker