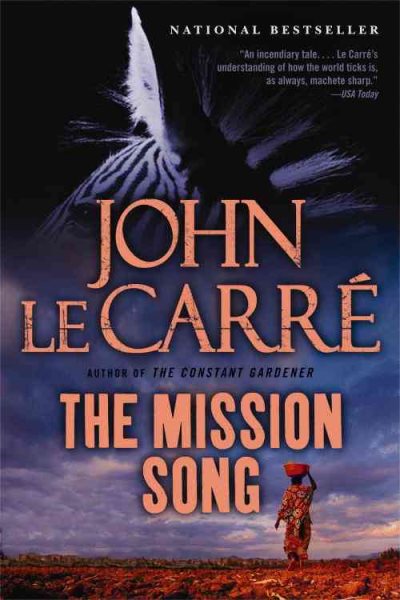 Working as an interpreter for British Intelligence, Bruno Salvador, the abandoned son of an Irish father and Congolese mother, is sent to a mysterious island to interpret a secret conference among Central African warlords. Read More
"Gripping and moving. . . . A marvelous return to the John le Carre of old, with all the captivating characters, finely rendered landscapes, and messy complexities that have always powered his best work." -San Francisco ChronicleHailed everywhere as a masterpiece of suspense, John le Carre's return to Africa is the story of Bruno Salvador (aka Salvo), the 25-year-old orphaned love child of an Irish missionary and a Congolese woman. Quickly rising to the top of his profession as an interpreter, Salvo is dispatched by British Intelligence to a top-secret meeting between Western financiers and East Congolese warlords, where he hears things not intended for his ears--and is forced to interpret matters never intended for his reawoken African conscience. By turns thriller, love story, and comic allegory of our times, The Mission Song recounts Salvo's heroically naive journey out of the dark of Western hypocrisy and into the heart of lightness."Entertaining... Salvo may be the author's most naive creation to date, but he is also one of the most fascinating and engaging... The atmosphere of intrigue builds nicely and convincingly."-Baltimore Sun"An incendiary tale... Le Carre's understanding of how the world ticks is, as always, machete sharp." -USA TODAY"To categorize Le Carre, as many do, as a 'spy' novelist is to do him a disservice; he uses the world of cloak-and-dagger much as Conrad used the sea--to explore the dark places in human nature.' -Washington Post Book World"Le Carre's insight into the dense, dangerous nexus of corporate and government interests is chillingly assured." -New York Times Book Review"Engaging, masterfully told... The Mission Song offers an emotional resonance that stays with a reader long after the book is done." -Cleveland Plain Dealer Read Less

Goodreads reviews for The Mission Song