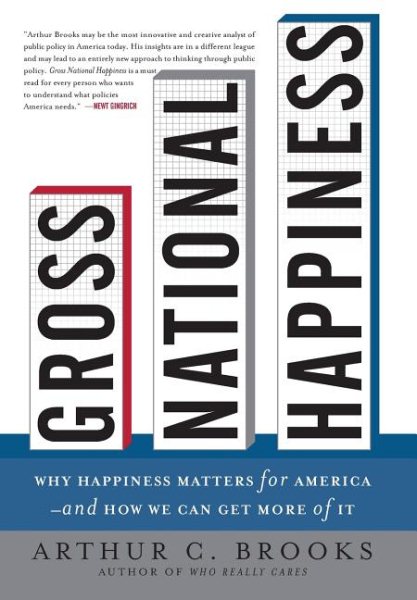 Democrats and Republicans have two very different visions of America. Which one will make us happier? Read More
Who are the happiest Americans? Surveys show that religious people think they are happier than secularists, and secularists think they are happier than religious people. Liberals believe they are happier than conservatives, and conservatives disagree. In fact, almost every group thinks it is happier than everyone else. In this provocative new book, Arthur C. Brooks explodes the myths about happiness in America. As he did in the controversial <i>Who Really Cares: The Surprising Truth About Compassionate Conservatism</i>, Brooks examines vast amounts of evidence and empirical research to uncover the truth about who is happy in America, who is not, and-most important-why. He finds that there is a real "happiness gap" in America today, and it lies disconcertingly close to America&#39;s cultural and political fault lines. The great divide between the happy and the unhappy in America, Brooks shows, is largely due to differences in social and cultural values. The values that bring happiness are faith, charity, hard work, optimism, and individual liberty. Secularism, excessive reliance on the state to solve problems, and an addiction to security all promote unhappiness. What can be done to maximize America&#39;s happiness? Replete with the unconventional wisdom for which Brooks has come to be known, <i>Gross National Happiness</i> offers surprising and illuminating conclusions about how our government can best facilitate Americans in their pursuit of happiness. Read Less

Goodreads reviews for Gross National Happiness: Why Happiness Matters for America--and How We Can Get More of It

The Conservative Heart: How to Build a Fairer, Happier, and...

The Road to Freedom: How to Win the Fight for Free Enterpris...

Wealth and Justice: The Morality of Democratic Capitalism (V...