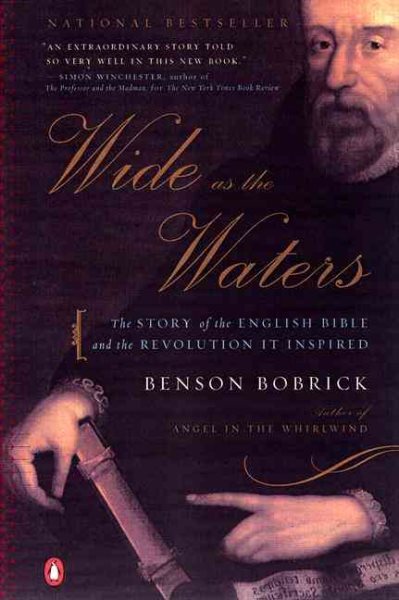 Relates the story of the "English Bible," with details of how King James assembled a team of experts to translate the text into English, and examines the political, social, cultural, and spiritual ramifications of the King James Bible. Read More
Next to the Bible itself, the English Bible was-and is-the most influential book ever published. The most famous of all English Bibles, the King James Version was the culmination of centuries of work by various translators, from John Wycliffe, the fourteenth-century initiator of English Bible translation, to the committee of scholars who collaborated on the King James translation. Wide as the Waters examines the life and work of Wycliffe and recounts the tribulations of his successors, including William Tyndale, who was martyred, Miles Coverdale, and others who came to bitter ends, as well as the fifty-four scholars from Oxford and Cambridge who crafted the King James Version of the Bible. Historian Benson Bobrick traces this story through the tumultuous reigns of Henry VIII, Edward VI, Mary Tudor, and Elizabeth I, a time of fierce contest between Catholics and Protestants in England. Once people were free to interpret the word of God, they began to question the authority of their inherited institutions, both religious and secular. This led to reformation within the Church, and to the rise of constitutional government in England and the end of the divine right of kings. Wide as the Waters is a story about a crucial epoch in the development of Christianity, about the English language and society, and about a book that changed the course of history. "Bobrick is an exceptionally able writer of popular histories. . . . This new book is by far his most ambitious. . . . He succeeds entirely in the challenge he sets himself." (Simon Winchester, author of The Professor and the Madman, for The New York Times Book Review) "With this compelling study, Bobrick has written an intricate and delightful prelude to any effective understanding of the evolution of modern Western democracy." (Michael Pakenham, The Baltimore Sun) "[Wide as the Waters] . . . has the satisfying concreteness of a good novel. . . . This fast-paced nonfiction narrative is so engaging that it's likely to make a believer of any reader." (Daniel Mendelsohn, New York Magazine) Read Less

Goodreads reviews for Wide as the Waters: The Story of the English Bible and the Revolution It Inspired

Master of War: The Life of General George H. Thomas

East of the Sun: The Epic Conquest and Tragic History of Sib...