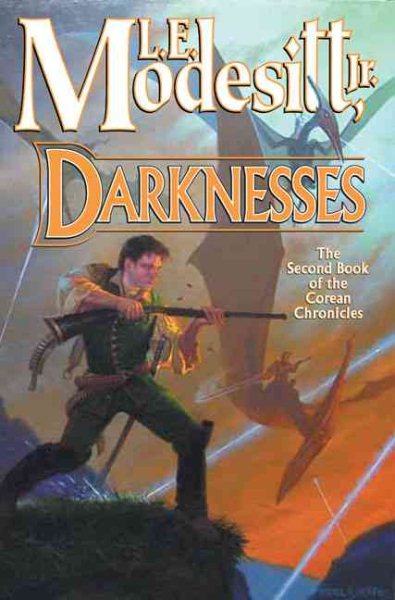 The magically gifted Alucius, the Militia's youngest captain, faces a would-be conqueror whose formidable military and magical campaigns are being assisted by a host of legendary creatures. Read More
Darknesses, the sequel to Legacies, is the second volume of L. E Modesitt, Jr. 's new fantasy sequence, the Corean Chronicles. Corus is a world of humans, but also of strange animals and supernatural creatures. It is a world of magical powers and of a few people who are Talented enough to use them. Alucius, the hero of the story, is one such person. In Legacies we saw how he grew from a Talented child on a lonely Nightsheep ranch in the Iron Valleys to a proficient soldier who used his wits and his Talent to become the first to escape military enslavement in the neighboring country of Madrien. Now captain of the Twenty-first Company, the youngest officer of his rank in the Militia, he must face new challenges, both military and magical. Corus has been fragmented since the collapse of its ancient magic-powered civilization. A would-be conqueror has somehow revived sorcerous creatures of legend to assist in his crusade to reunite the continent under his rule. The Iron Valleys are forced into an alliance with the Lord-Protector of Lanachrona and the Twenty-first is dispatched to stand against the invaders. Neither the officers above him nor the men under him know it, but Alucius's Talent is their only hope for victory, or even survival. In Darknesses, Alucius learns more about his magical Talent, meets many more supernatural creatures, and discovers the sinister forces vying for power behind the scenes across Corus. This volume completes the story arc begun in Legacies, but there will be further books set in this world in the future. Read Less

The Magic Engineer (Saga of Recluce)