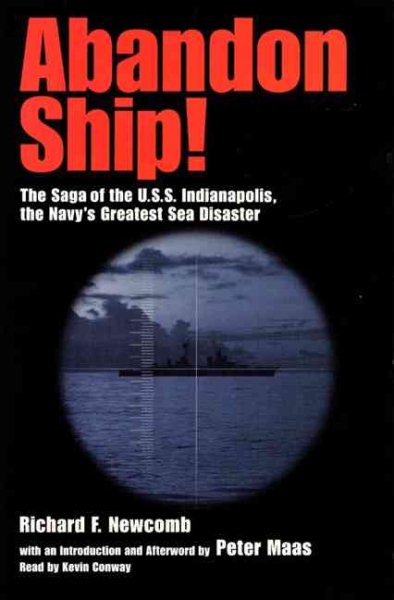 A chronicle of the U.S.S. Indianapolis, updated with newly uncovered data, retraces the privations suffered by survivors of this World War II vessel in the aftermath of a Japanese torpedo attack. Read More
Sailing across the Pacific, the battle-scarred heavy cruiser Indianapolis delivered a secret cargo that would trigger the end of World War II. Then, continuing westward, she was torpedoed and sunk by a Japanese submarine. More than 900 men spent four horrific days and five nights in the ocean with no water to drink, savaged by a pitiless sun and swarms of sharks. Incredibly, nobody knew of their plight until a Navy patrol plane accidentally discovered them. Miraculously, 316 crewmen still survived.Originally published in 1958, Abandon Ship! was the first book to describe the unspeakable ordeal the survivors of the Indianapolis endured, and the first to scrutinize the role of the U.S. Navy in the saga, including the surprising court-martial of the ship's Captain, Charles Butler McVay III.This newly released edition, updated with a new introduction and after-word by Peter Maas, reveals facts unavailable to Newcomb and chronicles a 40-year crusade to restore the Captain's good name. Maas also pays tribute to the author who dared, ahead of his time, to expose military malfeasance and cover-up and inspire a courageous battle to correct a grave miscarriage of justice. Read Less

Goodreads reviews for Abandon Ship : The Saga of the U.S.S. Indianapolis, the Navy's Greatest Sea Disaster

The Terrible Hours: The Greatest Submarine Rescue in History