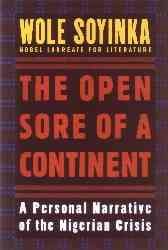 Traces Nigeria's recent history and politics, chronicling its decline from post-colonial success to its current military dictatorship, and speculates on its future as a nation Read More
On November 10, 1995, the Nigerian military government under General Sani Abacha executed dissident writer Ken Saro-Wiwa along with eight other activists, and the international community reacted with outrage. From the Geneva based International Commission of Jurists (who called the executions a criminal act of state murder) to governments around the world (including the United States) who recalled their ambassadors, to the Commonwealth of Former British Colonies, who suspended Nigeria from the group, the response was quick, decisive, and nearly unanimous: Nigeria is an outcast in the global village. The events that led up to Saro-Wiwa's execution mark Nigeria's decline from a post-colonial success story to its current military dictatorship, and few writers have been more outspoken in decrying and lamenting this decline than Nobel Prize laureate and Nigerian exile Wole Soyinka.In The Open Sore of a Continent, Soyinka, whose own Nigerian passport was confiscated by General Abacha in 1994, explores the history and future of Nigeria in a compelling jeremiad that is as intense as it is provocative, learned, and wide-ranging. He deftly explains the shifting dramatis personae of Nigerian history and politics to westerners unfamiliar with the players and the process, tracing the growth of Nigeria as a player in the world economy, through the corrupt regime of Babangida, the civil war occasioned by the secession of Biafra under the leadership of Chief Odumegwu Ojukwu, the lameduck reign of Ernest Sonekan, and the coup led by General Sani Abacha, arguing that "a glance at the mildewed tapestry of the stubbornly unfinished nation edifice is necessary" to explain where Nigeria can go next. And, in the process of elucidating the Nigerian crisis, Soyinka opens readers to the broader questions of nationhood, identity, and the general state of African culture and politics at the end of the twentieth century. Here are a range of issues that investigate the interaction of peoples who have been shaped by the clash of cultures: nationalism, power, corruption, violence, and the enduring legacy of colonialism. In a world tormented by devastation from Bosnia to Rwanda, how do we define a nation: is it simply a condition of the collective mind, a passive, unquestioned habit of cohabitation? Or is what we think of as a nation a rigorous conclusion that derives from history? Is it geography, or is it a bond that transcends accidents of mountain, river, and valley? How do these varying definitions of nationhood impact the people who live under them? Soyinka concludes with a resounding call for international attention to this question: the global community must address the issue of nationhood to prevent further religious mandates and calls for ethnic purity of the sort that have turned Algeria, Rwanda, Bosnia, and Sri Lanka into killing fields.Soyinka brings a lifetime of study and experience to bear on his writing, combining the skills of a poet and playwright with the astute political observations of a seasoned activist. An important and timely volume,The Open Sore of a Continent will be required reading for anyone who cares about Africa, human rights, and the future of the global village. Read Less

Goodreads reviews for The Open Sore of a Continent: A Personal Narrative of the Nigerian Crisis (The W.E.B. Du Bois Institute Series)

Death and the King's Horseman

Death and the King's Horseman: A Play