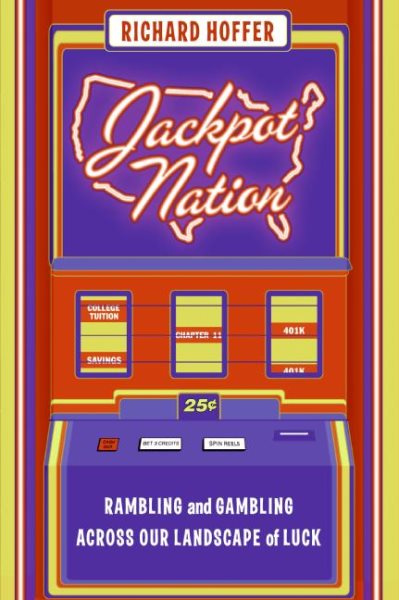 An investigation into how gambling has become one of America's most popular and problematic entertainments tours the myriad forms of gambling, from lotteries and casinos to raffles and sports betting, in a high-spirited account that offers insight into gambling's symbolism and seductiveness. 25,000 first printing. Read More
Is this a great country or what? You can bet on the turn of the card, a roll of the dice—but also the NFL, the NCAA, and which Olson twin marries first. We bet $80 million a year, the amount growing wildly as more and more people gain access to this huge American wheel of fortune. No longer quarantined in Las Vegas, gambling has become as local as our neighborhood cineplex. It's no wonder that we spend more money gambling than we do on movies, music, sports, video games, and theme parks combined! If there's not a casino around the corner, there's one on your laptop computer. In Jackpot Nation, acclaimed Sports Illustrated writer Richard Hoffer takes us on a headlong tour, alternately horrifying and hilarious, across our landscape of luck, discovering just how ridiculously determined we are to gamble. Whether he's trying to win a side of bacon in a Minnesota bar, hustling a paper sack filled with $100,000 cash across Las Vegas parking lots, poring over expansion plans with a tribal chief in California, or visiting a retired bus salesman with a poor understanding of three-game parlays in his New York prison cell, Hoffer finds a national inclination—a cultural predisposition, even—to take a chance.Hoffer shows us how Americans—adventurers at heart—have embraced this ability to take recreational risks with a surprising gusto. But as he pokes into this country's far corners, traveling coast to coast with odds as his copilot, he uncovers more than just the playful exercise of that age-old fantasy—something for nothing. He discovers that the very institutions that used to regulate this workout are now its biggest cheerleaders. Whereas government, religion, and business once restricted our ability to gamble, making it taboo even, they have now taken ownership of the pastime. Yesterday's numbers racket is today's state lottery; yesterday's mobbed-up casino is now part of a Fortune 500 company. It's one thing to recognize the house edge, but sometimes it's quite another to figure out who actually owns the house.Still, Hoffer manages to find the fun in all this, as equally delighted with the delirium of a slot machine trade show as the religious risk of an underground poker game, almost right beneath the spires of the Mormon Tabernacle. He concludes that people are, mostly, having a good time. If he also uncovers a downside—the outlandish vigorish that comes with its growing acceptance—well, that's why they call it gambling. Read Less

Goodreads reviews for Jackpot Nation: Rambling and Gambling Across Our Landscape of Luck

When the Man You Love Is Ill: Doing Your Best for Your Partn...