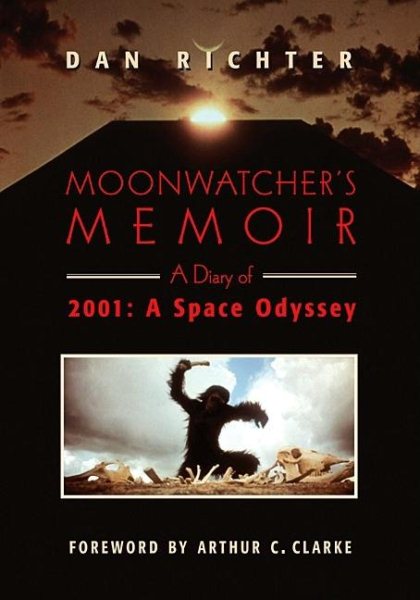 A behind-the-scenes look at the filming of Stanley Kubrick's masterpiece 2001: A Space Odyssey describes the author's role as choreographer and star of the film's opening sequence and his filmmaking experiences under the leadership of the innovative Kubrick, in a volume complemented by numerous illustrations, inside anecdotes, and memorabilia. Original. Read More
Dan Richter was a struggling mime artist in 1966 when he received a call summoning him to discuss the incomplete opening sequence of 2001: A Space Odyssey, then being shot by Stanley Kubrick in London. Deeply impressed by the young mime, Kubrick promptly hired Richter to choreograph and star in “The Dawn of Man” sequence as Moonwatcher, the man-ape who opens the epic film about the origin and future of humankind. Moonwatcher’s Memoir is Richter’s day-by-day account of his year-long education in filmmaking under the command of one of cinema’s most innovative captains. Filled with illustrations and memorabilia from the making of 2001, this book will fascinate film aficionados, Kubrick devotees, and science fiction fans alike. Set three million years ago, “The Dawn of Man” tells the story of a tribe of our man-ape ancestors, who take the first step on the long road to modern humanity. Determined to make an anthropologically accurate film, Kubrick insisted on much more than the worn convention of men jumping around in “monkey suits.” Here are the stories behind 2001’s landmark achievements in make-up, costume, choreography, and cutting-edge cinematography that have made this film an enduring achievement. At once the story of Kubrick and his probing vision, the 2001 team and their interactions, and Dan Richter’s personal triumph under intense pressure, Moonwatcher’s Memoir is an inside look at eighteen unique minutes of film, climaxing in the longest flash forward in cinema’s history—three million years, from bone to space station, in a twenty-fourth of a second—as Moonwatcher hurls man’s first weapon into the sky and launches the episode into the stratosphere of film’s greatest moments. 24 pages of black-and-white photographs complete this rare behind-the-scenes narrative chronicling the filming of Stanley Kubrick's ultimate vision. Read Less

Goodreads reviews for The Light of Other Days

Beyond : Visions Of The Interplanetary Probes

Macroshift: Navigating the Transformation to a Sustainable W...