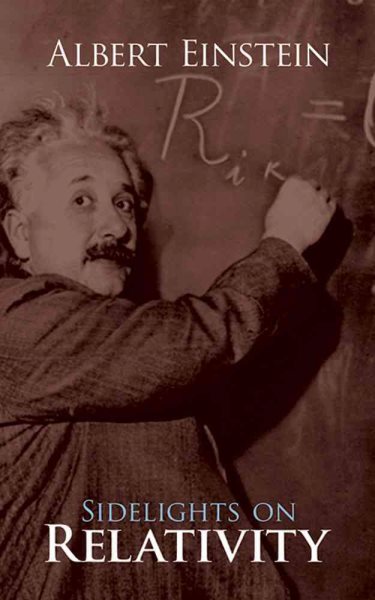 Two influential essays: "Ether and Relativity" (1920) discusses its subjects' related properties; "Geometry and Experience" (1921) describes Euclidean or other geometric systems in connection with the concept of a finite universe. Read More
In 1905, a German technical journal, Annalen der Physik, published a remarkable paper by a young clerk in the patent office at Berne, Switzerland. The clerk was Albert Einstein. The paper outlined his Special Theory of Relativity, a revolutionary physical theory which discarded the concept of absolute motion in favor of relative motion in the context of a four-dimensional continuum of space-time. It proved to be the most profound revolution in physics since Newton.About ten years later, building on his earlier work, Einstein formulated the General Theory of Relativity in which he offered a new solution to the great problem of gravitation, postulating the non-Euclidean character of the space-time continuum. Together, the two theories constituted a radically reoriented way of looking at the physical universe, an approach that solved many of the unresolved difficulties of classical mechanics and paved the way for great advances in 20th-century physics. This concise volume contains two addresses by Dr. Einstein outlining aspects of the theories. Ether and Relativity (1920), delivered at the University of Leyden, discusses the properties demanded of the ether of space by the theory of relativity. Geometry and Experience (1921), given at the Prussian Academy of Sciences, describes the limits within which the Euclidean or any other practical geometric system can be held to be approximately true in connection with the concept of a finite universe.Both lectures are reprinted here complete and unabridged; both express elegant ideas in simple prose devoid of complicated equations or abstruse terminology; both offer scientists and laypeople unparalleled insight into the seminal thinking of the 20th century's greatest physicist. Read Less

Goodreads reviews for Sidelights on Relativity

Albert Einstein (People Who Made History)