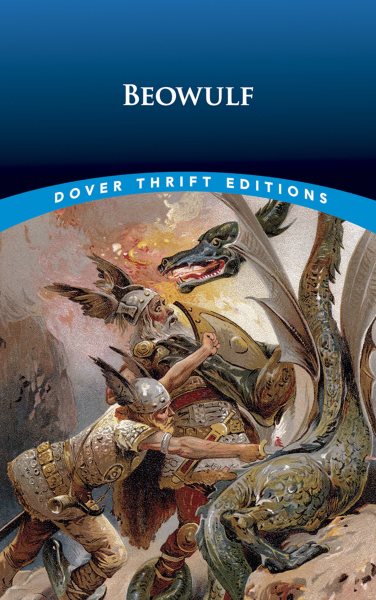 Finest heroic poem in Old English celebrates the exploits of Beowulf, a young nobleman of southern Sweden. Combines myth, Christian and pagan elements, and history into a powerful narrative. Genealogies. Read More
One of the most universally studied of the English classics, Beowulf is considered the finest heroic poem in Old English. Written ten centuries ago, it celebrates the character and exploits of Beowulf, a young nobleman of the Geats, a people of southern Sweden.Beowulf first rescues the royal house of Denmark from two marauding monsters, then returns to rule his people for 50 years, ultimately losing life in a battle to defend the Geats from a dragon's rampage. The poem combines mythical elements, Christian and pagan sensibilities, and actual historical figures and events in a narrative that ranges from vivid descriptions of fierce fighting and detailed portrayals of court life to earnest considerations of social and moral dilemmas. Originally written in Old English verse, it is presented here in an authoritative prose translation by R. K. Gordon. Read Less