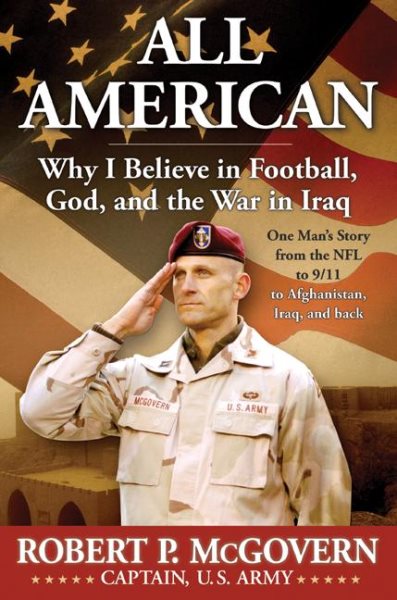 An NFL linebacker-turned-military prosecutor presents an insider's look at the Iraq War, sharing his decision to join the military, his relationships with soldiers and citizens he has befriended, and his arguments in support of the conflict. Read More
Imagine what it's like to come face-to-face with a terrorist in a foreign courtroom—and you're the lawyer looking to put him away. Imagine what it's like to see happy children in Iraq and Afghanistan smiling and waving at U.S. military helicopters.Imagine what it's like to be an undersized linebacker in the National Football League, where most of the players you're supposed to tackle weigh more than you.Imagine what it's like to be the seventh of nine kids growing up in an Irish Catholic family in the 1970s.Imagine what it's like to be Robert McGovern, current captain in the U.S. Army, National Football League veteran, and proud member of a loving New Jersey family.Robert McGovern has a story to tell—not about himself, although he's a part of it—but about the men and women he has called friends, mentors, and heroes. From his days in Catholic school to his years as a college and professional football player to his current career as an army judge advocate general, McGovern knows an all-American when he sees one. And in this book he introduces you to the ones he's met from all walks of life.McGovern traded his shoulder pads for legal briefs more than a decade ago. He prosecuted drug dealers while working in the office of Manhattan District Attorney Robert Morgenthau. On September 11, 2001, he was in lower Manhattan when the Twin Towers fell. After working the pile at Ground Zero, McGovern asked to be mobilized from his Army Reserve duty to active duty. He was first sent to Afghanistan, where he advised battlefield commanders on legal rules of engagement. He then went to Iraq to prosecute terrorist suspects. He returned from both tours convinced that Americans needed to hear another side of the war on terrorism—the side he saw firsthand. Read Less

Goodreads reviews for All American: Why I Believe in Football, God, and the War in Iraq

All American: Football, Faith, and Fighting for Freedom