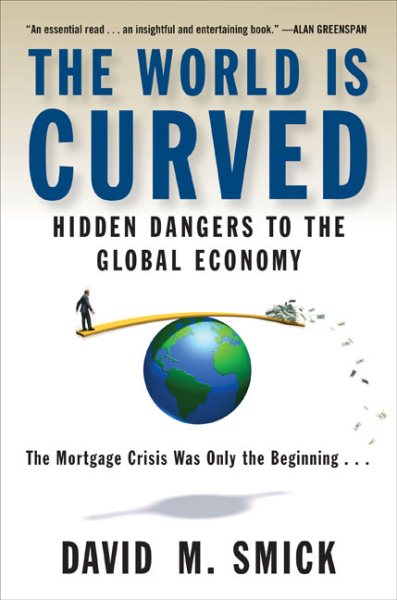 A founder of the acclaimed quarterly The International Economy explains the economic problems behind the credit and mortgage issues of the past two years, identifying hidden connections between key events and the global economy. 50,000 first printing. Read More
David Smick keeps a low profile, but experts consider him one of the most insightful financial market strategists in the world. For more than two decades, he has conferred with central bankers (such as Alan Greenspan and Ben Bernanke) and advised top Wall Street executives and investors, from George Soros to Michael Steinhardt to Stan Druckenmiller. Political leaders (from Bill Bradley to Jack Kemp) have regularly sought his policy advice. The World Is Curved picks up where Thomas Friedman’s The World Is Flat left off, taking readers on an insider’s tour through the private offices of central bankers, finance ministers, even prime ministers. Smick reveals how today’s risky environment came to be?and why the mortgage mess is a symptom of potentially far more devastating trouble. He wrestles with the two questions on everyone’s mind: How bad could things really get in today’s volatile economy? And what can we do about it? Drawing on riveting anecdotes in language anyone can understand, Smick explains: Why the churning cauldron we call China (the next great bubble to burst) represents a powerful threat to everyone’s pocketbook How Japanese housewives have taken control of their nation’s savings, and why it matters to us How greed-driven bankers and investment bankers have put everyone’s pensions and 401(k)s at risk Why today’s ?incredible shrinking central banks” may not be able to save us when the next crisis hits Why the big-money Russian, Chinese, Saudi, and Dubai sovereign wealth funds represent a tectonic shift in global financial power, away from the United States, Europe, and Japan Why the world desperately needs a ?big think” financial doctrine to guide today’s dangerous ocean of money The World Is Curved is the rare book that speaks simultaneously to the Wall Street, Washington, and London elite, yet its apt storytelling shows Main Street readers how to survive in these turbulent times. Read Less

Goodreads reviews for The World Is Curved: Hidden Dangers to the Global Economy

The Great Equalizer: How Main Street Capitalism Can Create a...

The World Is Curved: Hidden Dangers to the Global Economy

Among the Impostors (2) (Shadow Children)