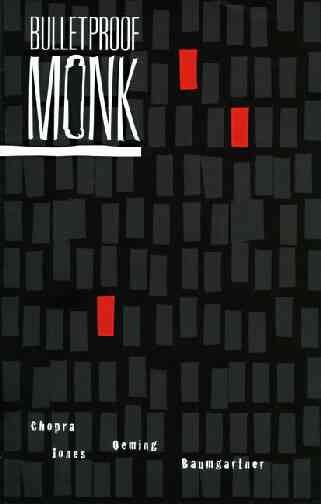 Shortly after saving a Tibetan village from the Nazis, the Bulletproof Monk vanished without a trace and now Kar, a young man living in San Francisco, searches for the legendary hero while trying to find acceptance into a local gang. Read More
.html(W) Brett Lewis, R.A. Jones (A) Mike Oeming (I) JasonBaumgartner(Cover) Mike OemingIn stores the week of May 22nd.The Concept: After saving a Tibetan village from Nazi scientists, theBulletproof Monk disappeared into legend, leaving behind a story that has beenpassed down for generations and a hope for his return. Kar, a young man nowliving in the U.S., searches for his peoples' hero while he evades secret agentsand tries to find acceptance and love in a local gang.Filmmaker John Woo provides the introduction to this collected edition ofThe Bulletproof Monk mini-series. The three-part story chronicles a young man'ssearch for a Tibetan legend. Who is the Bulletproof Monk, why are the Chineseafraid of him and where is he now? Features a new cover by Mike Oeming. FC,80pp, Trade Paperback Read Less