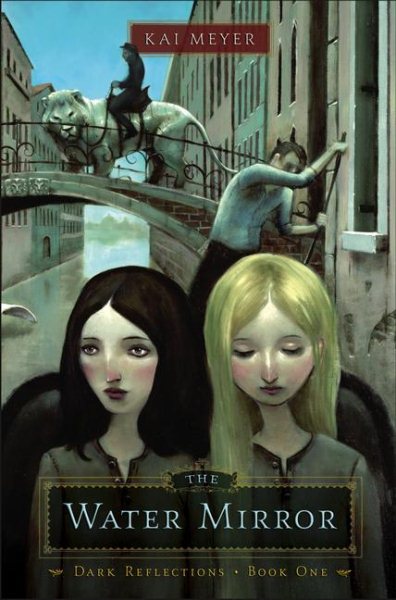 In a place similar to Venice, Italy, two teenaged orphans, apprenticed to a maker of magic mirrors, begin to realize that their fates are tied to the magical protector known as the Flowing Queen and to the ruler of Hell, respectively. Read More
In Venice, magic is not unusual. Merle is apprenticed to a magic mirror maker, and Serafin -- a boy who was once a master thief -- works for a weaver of magic cloth. Merle and Serafin are used to the mermaids who live in the canals of the city -- beautiful creatures with hideous mouths that split their faces from ear to ear -- and to the guards who patrol the streets on living stone lions. Merle herself possesses something magical: a mirror whose surface is water. She can reach her whole arm into it and never get wet.But Venice is under siege by the Egyptian Empire; its terrifying mummy warriors and flying sunbarks are waiting to strike. All that protects the Venetians is the Flowing Queen. Nobody knows who or what she is -- only that her power flows through the canals and keeps the Egyptians at bay.When Merle and Serafin overhear a plot to capture the Flowing Queen, they are catapulted into desperate danger. They must do everything they can to rescue the Queen and save the city -- even if it means getting help from the Ancient Traitor himself.Kai Meyer's bold, original fantasy conjures up a land of magic and menace as Merle and Serafin begin a journey to unimagined realms in the extraordinary world of Dark Reflections. Read Less

Reports of Cases Argued and Adjudged in the Courts of King's...

Laws Made and Passed By the General Assembly of the State of...