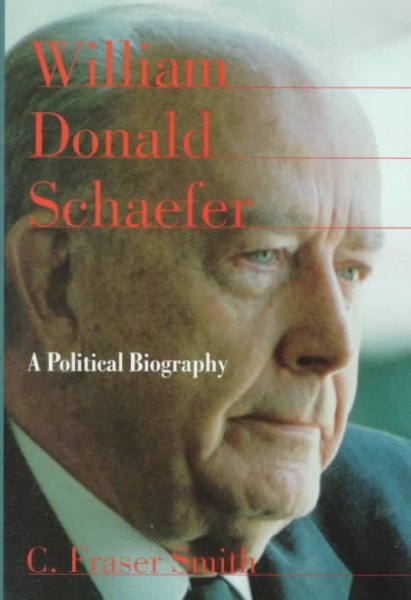 Smith (editorial writer, Baltimore Sun ) explores the career and character of Baltimore's "Do It Now" mayor. Drawing on both interviews and documentary source material, Smith takes a politically serious, but also personal, approach to his subject. Annotation c. Book News, Inc., Portland, OR (booknews.com) Read More
Baltimore's "Do It Now" mayor, two-term Maryland governor, and recently elected comptroller of the treasury, William Donald Schaefer may be the most colorful character ever to play on the Free State's political stage—though competition for the honor is intense. In this wonderfully readable account, Fraser Smith explores the formative influences, backroom deals, personal relationships, quirky Baltimorisms, vicious fights, civic pride, splashes in the National Aquarium seal pool, victories, defeats, draws—everything that makes Schaefer's career colorful and that helps us to understand the man himself.A seasoned reporter who covered Schaefer's terms as mayor and governor for the Baltimore Sun, Smith takes a serious-minded but also throughly human-interest approach to his subject—a study in character and the capacity of certain people to make a difference in the story of their time and locale. In Schaefer's case, the story concerns the struggle of Baltimore to survive and, if possible, renew itself. Smith draws on a sizable body of documentary source material; his scores of interviews provide him with juicy quotation and vibrant commentary. The book includes a gallery of photos, most never before published, which recall memorable moments in Schaefer's eventful career.William Donald Schaefer: A Political Biography will fascinate Maryland voters, appeal to students of twentieth-century America, and engage anyone who loves a good story well told."His life in politics had been vouchsafed by do gooders, club house operators, slick businessmen, and others. He managed to find the best in each of these without being a servant to any. He was a classic 1950s-style Can-Do man, a veteran of the Second World War, a holdover from the time in American life when learning from experience and respected elders was a way of life. He was a career politician who ran for office to serve—to work for people, to care about their welfare. He wanted to think of himself—and to have others think of him—as a distinguished city father, a public servant. He seemed to be the last Baltimorean to see how well he had succeeded."—from the Preface Read Less

Dictionary of Sodium, Fats and Cholesterol